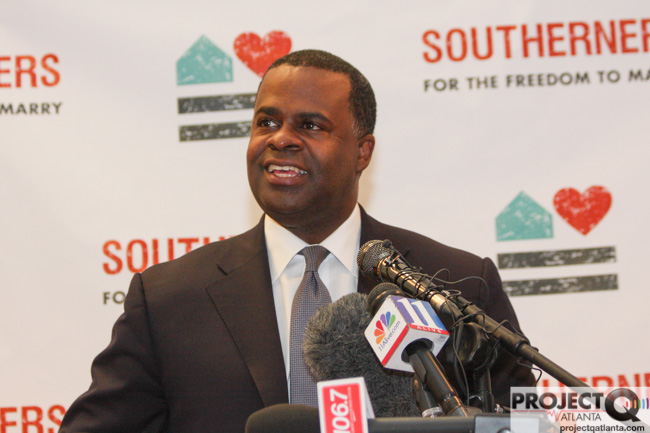 “As a result of Governor Pat McCrory’s decision to sign discriminatory and unnecessary legislation into law, effective today I am directing all City departments to stop non-essential, publicly-funded employee travel to the State of North Carolina. I extend my support to Charlotte Mayor Jennifer Roberts, who worked to enhance protections for the city’s LGBT population, as well as to the LGBT residents of North Carolina. Every person, regardless of their gender, gender expression or sexuality is a valued member of our community.”

Reed announced the travel ban on Monday, the second swipe that city has taken against North Carolina since Gov. Pat McCrory signed House Bill 2 into law on March 23. A week after the measure became law, Atlanta City Council President Ceasar Mitchell and Council members Alex Wan and Andrew Dickens proposed a resolution asking the NBA to move the 2017 All-Star Game from Charlotte to Atlanta over the anti-gay law.

The NBA demurred, issuing a statement that the league hopes the city and the state “can work through their differences” on the law.

House Bill 2 guts an LGBT-inclusive non-discrimination ordinance recently passed in Charlotte and bans any city in the state from passing similar measures.

Since it became law, San Francisco, Seattle, New York City and the states of New York and Washington pushed back by banning non-essential travel by public employees to North Carolina. It has also prompted a federal lawsuit and the White House has said the law raises “policy and legal questions” that federal agencies are investigating.

“We are standing united as San Franciscans to condemn North Carolina’s new discriminatory law that turns back the clock on protecting the rights of all Americans including lesbian, gay, bisexual and transgender individuals,” [San Francisco Mayor Ed] Lee said in a statement. “Effective immediately, I am directing City Departments under my authority to bar any publicly-funded City employee travel to the State of North Carolina that is not absolutely essential to public health and safety.”

In March, Reed also blasted an anti-gay measure passed by Georgia lawmakers that was later vetoed by Gov. Nathan Deal.