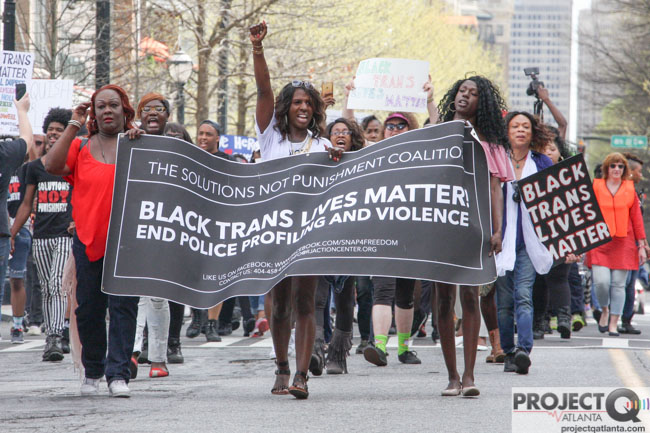 Some 200 LGBTQ people and supporters marched through Midtown on Sunday, protesting violence against transgender people – including the murders of eight trans women so far this year – that has sent heartbreak, fear and anger through trans communities across the country.

Chanting “we come to slay” – a reference to Beyonce’s popular song Formation – and “I’m trans, I’m black, respect my gender just like that,” protesters marched from the North Avenue Marta Station through Midtown’s popular 10th Street corridor and into Piedmont Park where they rallied. The event was called “March for the Gurlz: Stop Killing Black Trans Women.”

Eight transgender people – all trans women of color – have been killed across the U.S. so far this year. The victims include Chyna Gibson, who performed in drag shows and pageants in Atlanta and across the country. Gibson was one of three trans women killed within days of each other in Louisiana last month. Atlanta has the fourth-highest percentage of transgender residents in the U.S.

“We wanted to create a space for trans women, black trans women, in Atlanta to feel safe, to feel powerful, to feel like they’re enough,” Williams said.

Jamie Freya, another organizer of the event, told of being homeless and sleeping in Piedmont Park while also being the victim of intimate partner violence.

“This is a little bit emotional for me because this very park was a park that I slept in. This very park was a park that, you know, I have gotten into fights with my boyfriend in. I’ve been hit here. I’ve been beat on Peachtree, in the middle of Peachtree right by Bulldogs, and I watched as bystanders stood there and watched me be beat,” Freya said.

Freya is not alone in this experience. The National Center for Transgender Equality has noted that family rejection, discrimination and violence are key factors in the prevalence of homelessness among transgender individuals. One in five trans people have been homeless, the center has reported.

March organizers also highlighted the need for more resources to address homelessness and other issues that transgender people face.

Freya said after the event that she was pleased with the turnout and that participants were well received as they marched through crowds of mostly cisgender Sunday brunchers in Atlanta’s most well-known gayborhood.

“I think the experience of walking through Peachtree and down 10th Street was actually overwhelmingly positive,” Freya said.

“I thought I would never, and I mean never, see this day come to pass – where we have a march for trans women down Atlanta’s Peachtree street this day. Y’all ought to be proud,” Morrison said.

“Trans lives do matter. We want to live. We have not had that chance. We are demonized everyday. Put down, told we should not exist, we should not be loved. That’s not true,” Morrison added. “The time is now for us to stand and say no more. I can’t take another girl, one of my sisters and one of them, being killed.”

In recent months, religious conservatives and elected officials in Georgia have taken aim at transgender people and students.

In August, LGBTQ activists rallied outside a MARTA station in downtown Atlanta to call attention to anti-trans violence.