Atlanta man says he was fired after enduring anti-gay harassment 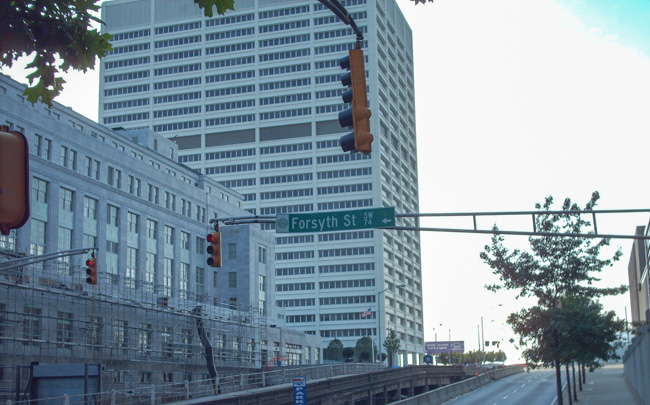 A security guard alleges in a lawsuit that he and a co-worker were called “sugar boys,” “girlfriends” and “sissies” and that he was fired after reporting to management the harassment he faced at the federal courthouse in downtown Atlanta.

Michael O'Donnell filed the federal lawsuit in September 2017 against his former employer Akal Security and the U.S. Marshals Service, which hired Akal to provide security services at the Richard B. Russell Federal Building (top photo) in downtown Atlanta. O'Donnell alleges in the lawsuit that co-workers targeted him and fellow security officer Marquice Robinson after noticing the two spent time together and believed they were a gay couple.

In addition to calling them  “sugar boys,” “girlfriends” and “sissies,” the lawsuit alleges, co-workers also taunted them with “where my girls at – O’Donnell and Robinson,” “married couples don’t spend as much time together as y’all do,” “get off his train” [referencing male genitalia], and “Akal’s employees were talking about their relationship ‘not looking right’ because they are men.”

O’Donnell argued in the lawsuit that the discrimination and later firing in January 2017 were a violation of his Title VII protections against sex discrimination. On Oct. 16, Magistrate Judge J. Clay Fuller denied a motion from the defendants seeking to dismiss the lawsuit. Fuller ruled that O'Donnell's case was strong enough to continue.

Attorneys for O’Donnell alleged in the lawsuit that the defendants’ conduct was “intentional and/or reckless as well as extreme and outrageous, causing Mr. O’Donnell severe shame, humiliation, embarrassment and emotional distress of a nature that no reasonable person should be expected to endure.”

“To survive dismissal on his retaliation claim, [O’Donnell] must sufficiently allege that he had an objectively reasonable belief that he was subjected to a hostile work environment ‘because of h[is] sex,’ i.e., for failing to conform to the male gender stereotype,” Fuller said in his ruling. “The Court finds that he has done so.”

Akal argued that O’Donnell’s complaints were based on comments regarding his perceived sexual orientation, which they said was not protected by Title VII. They cited the case of a Clayton County employee who claimed he was fired for being gay. The U.S. Supreme Court is deciding whether to hear that case.

Fuller responded to Akal’s argument, saying, “At this early stage of the litigation, the Amended Complaint contains sufficient factual content to determine that the comments directed at [O’Donnell] were made on the basis of his failure to conform to a male stereotype – namely, the stereotype that suggests men should not spend as much time together as [O’Donnell’s] coworkers perceived he spent with Robinson.”

Fuller also said that his interpretation is bolstered by comments the co-workers made, including “where my girls at – O’Donnell and Robinson” and “married couples don’t spend as much time together as y’all do.”

“Other comments reflect a similar hostility toward the way they perceived [O’Donnell] behaving – namely, that he spent too much time with another male,” Fuller said.

O’Donnell is now proceeding without an attorney after his legal team withdrew from the case. There were no details given as to why they withdrew.

O’Donnell told WSB the harassment included a supervisor hitting him the mouth, causing him to bleed.

“I was shocked,” he said. “I’ve never been in a place or been a victim of workplace violence.”

O’Donnell said that the trouble with co-workers and management began as he and Robinson spent more time together.

“When you see two males as close as we were, I think that they started to stereotype us,” he said. “And when they did that, that opened us up to different harassing comments.”

“Two-plus years, and I’m still fighting. I’ll continue to fight to the end,” he added.

Evans claimed Georgia Regional Hospital fired her from her job as a security guard because she is a lesbian. Georgia Attorney General Chris Carr filed a motion to dismiss the case in January.