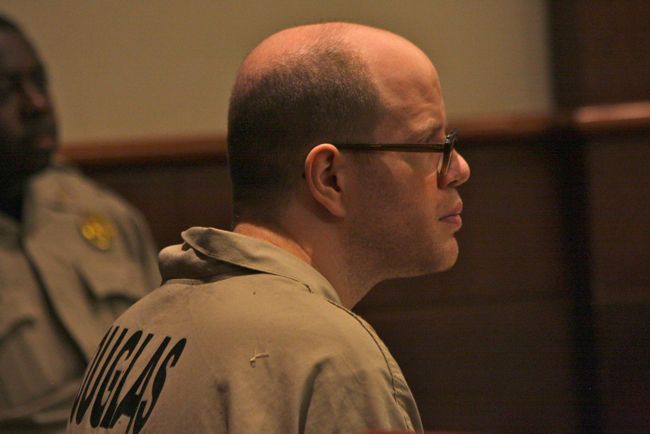 A judge sentenced a former Atlanta gay bar go-go dancer to 80 years in prison for turning three teen males into sex slaves for him and other men through a human trafficking operation he ran out of the Douglas County home he shared with his wife. Steven Donald Lemery sat motionless on Wednesday as Superior Court Judge David Emerson handed down what is likely to be a life sentence for the 36-year-old man who was found guilty last month on 10 charges ranging from human trafficking to pandering and aggravated child molestation. “This is a case that involved the exploitation of very young men. It involved drugs, alcohol, exploitation, degradation to a degree rarely ever witnessed in any courtroom in this state,” Emerson said. “It appears to this court that everything about your life was a falsehood.” The sentence Emerson delivered was stiffer than what Prosecutor Rachel Ackley had recommended. She sought an 80-year sentence for Lemery to serve 60 years. Emerson sentenced him to consecutive 25-year sentences on two counts of aggravated child molestation followed by a 30-year sentence on human trafficking charges. Emerson tacked on a total of 40 additional years on the remaining charges, prison time to be served concurrently with the other sentences. There is no parole on the three main sentences. Lemery’s attorney, Public Defender Tracey Gibson, argued for a 25-year sentence. She cited reports of Lemery’s diminished mental capacity, troubled childhood and difficult marriages in asking for a more lenient sentence. She also hinted that the three victims in the case – two were 15, one was 18 – were at least partially to blame for what Lemery did to them. “My client is a damaged person. He has been a victim in his life,” Gibson said. Ackley countered that following Gibson’s recommendation would mean “almost a life sentence,” which she argued would not be adequate in this case. “Almost a life sentence is not enough. It does not take into account the lives that were ruined by that man. Almost a life sentence doesn’t take away what happened to them,” Ackley said. “He made a conscious decision to become a child molester. He made a conscious decision to have sex with them and then prostitute them out and make them have sex with other, older men,” she added. Lemery’s conviction last month took a jury less than two hours to reach. It came after a four-day trial in which prosecutors painted Lemery as a predator who focused on underage teen males recruited through social media and quickly ensnared them in prostitution. Lemery ran the operation of a Douglasville home he shared with his wife, their children, his wife’s boyfriend and Atlanta drag queen Pasha Nicole. Lemery was found guilty of six counts of human trafficking, two counts of aggravated child molestation, one count of enticing a child for indecent purposes and one count of pandering by compulsion. He could have received up to two life sentences plus 160 years. The conviction comes nearly six months after Nicole, known legally as Christopher Thomas Lynch, received a 14-year sentence for forcing a transgender teenager into prostitution, supplying her crack cocaine, creating graphic photos and video of her and driving her to meet sex-for-pay clients. Nicole pleaded guilty on March 7. Nicole and Lemery were indicted in April 2011 by a Douglas County grand jury on 18 counts, ranging from aggravated child molestation to human trafficking and possession of drug-related objects, for enticing teens for sex and forcing them into sexual servitude. Lemery’s trial included testimony from a teen who was 15 when Lemery had sex with him, a year under Georgia’s age of consent, and a South Carolina teen that was forced into prostitution. That teen testified that Lemery isolated him from outside contact and forced him into prostitution. Another victim from Alabama testified that Lemery forced him to advertise for sex on Craigslist and detailed an incident in which he was burned and forced to have sex, according to the Douglas County Sentinel.

Finally, the victim got to how he was encouraged to be sold for sex in order to get money for gas so that Lemery could take him home. His cellphone went missing, he said, and he felt like he couldn't tell anyone how he felt or any options to get home. He said it was when he asked to be taken home when Lemery told him about putting ads on Craig's List, soliciting encounters from men. The victim said he didn't see any other way to get out and Lemery set up an encounter, even negotiating a price before driving the boy to a house. "I walked in and there was the black dude that just like grabbed me, pushed me down, got on top of me and held my arms (pinned down)," the victim said. "Then he had something and was like burning me. I don't know if it was wax or plastic, but it burned." He described a struggle to get away and then an older white male entering and attempting to rape him as he laid on the floor. He was able to get free and then ran more than 15 minutes to a McDonald's to get away. The boy said a few minutes after arriving there, Lemery showed up and didn't waste anytime asking the boy for the money, but the victim said he was trying to escape and didn't get paid.