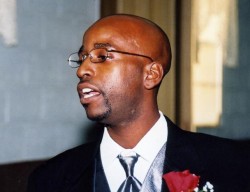 A Fulton County grand jury on Tuesday indicted a 30-year-old career criminal in the brutal murder of a gay Atlanta man that had gone unsolved for more than seven years. Torico Jackson, 30, now faces seven charges – including felony murder, armed robbery, aggravated assault and burglary -- related to the May 19, 2004 killing of John E. Ray (photo), who was beaten and stabbed in his Lakewood Heights home. But police, who nearly nabbed Ray’s killer the day after the killing, almost missed nabbing Jackson last month. Investigators with Atlanta police and the Fulton County District Attorney’s Office were working to link Jackson to the murder as his release from Valdosta State Prison approached last month. So they asked that he be held a while longer. “It’s just a coincidence that we were working this case, and we find out where he is,” Atlanta police Det. David Quinn tells the Atlanta Journal-Constitution. “We felt we had to make moves. They decided to hold him up based off us making contact and indicating that we plan to charge him with murder.” Investigators say they linked Jackson to the murder by matching blood samples from Ray’s car, which was crashed in an aborted police chase after the homicide, with a sample taken from Jackson in prison. “The car was found upside down with the airbag deployed and blood on the ceiling and on the dashboard,” Quinn tells the AJC, pointing out that a GBI blood sample analysis wasn’t completed until August 2006. “It was revealed that Torico Jackson’s blood was on that deployed airbag.” Police say Ray and Jackson met through a gay online dating site. Ray, a paralegal, apparently performed a criminal background check on Jackson before the killing, and left a printout of the inmate profile in his briefcase that was overlooked in the initial criminal investigation. The case will now be assigned to a Fulton County Superior Court judge and scheduled for trial. Photo courtesy Jonique Brown