Atlanta makes out with comic Guy Branum at Laughing Skull 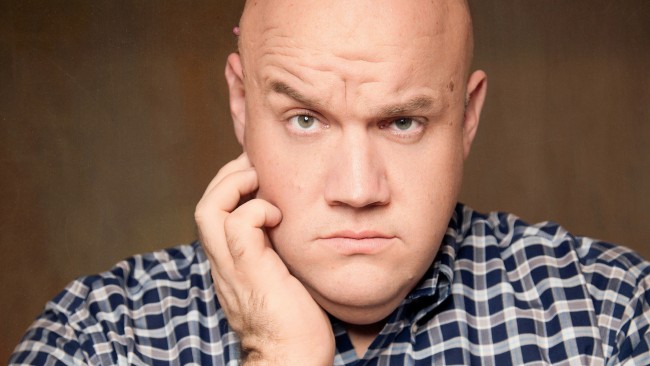 Guy Branum is a force of nature. The bold and brash gay comic with a take-no-prisoners sensibility and a come hither gaze takes Atlanta by storm this weekend.

You may know him as the “Staff Homosexual” on “Cheleea Lately,” or as Natalie Portman’s sassy friend in “No Strings Attached.” He’s also written appeared on or written for MTV’s “Punk’d,” and E!’s “Fashion Police,” among many others.

Now Branum’s Talk Show The Game Show mashes up the talk trope in a game show format on truTV. Under his hilariously watchful eye, comedians and celebrities battle to be “Best Guest Of The Night,” and the show is getting great notices. New episodes return Feb 1.

Meanwhile, Branum hits Atlanta for a headlining weekend at Laughing Skull Lounge on January 25-28. To get into the mood, we caught up with him to talk about his comedy, his TV show, and why he thinks Atlanta has amazing gay nightlife.

Is this your first time in Atlanta?

No, I came once in 2013 with W. Kamau Bell and some of the other writers from Totally Biased with W. Kamau Bell. As a gay performer, no one ever really booked me in the South before, so I was a little scared. Doing a tour for a progressive show like Totally Biased with a diverse and fun audience was a really great way to meet Atlanta. Plus the iced tea was what my mother raised me to believe iced tea should be.

Other than performing, what do you plan to do while in Atlanta?

I’m going out to gay bars. I always like having a nice gay evening when I’m in some town on tour, and I don’t know if I’ve ever had a more impressive experience than Atlanta. Everyone was perfectly put together. Gay guys, butch lesbians, even the straight girls who had gone out to the gay bar for the night came through correct. I have to see if you guys can keep this up.

How would you entice a viewer who has never seen Talk Show the Game Show to watch it?

It’s a show where celebrities compete to prove they’re the best talk show guest in America by earning points for doing the sorts of things you’re supposed to do on a talk show, like name dropping (two points), telling anecdotes (five points), or lying about their age (two points).

Who is your dream guest for Talk Show the Game Show?

It’s not about one guest, it’s about the panel, so my dream panel would probably be Amy Sedaris, Seth Rogan and for a touch of sex appeal Canadian Prime Minister Justin Trudeau.

You are speaking to a room filled with LGBT Trump supporters, what do you say to them?

I have a bomb strapped to me and the doors are locked. You deserve this.

Favorite LA trend the rest of the country doesn’t know about yet?

There’s a restaurant that all the actresses go to where your food order is an affirmation. So you don’t say “I want the Indian Curry Bowl.” You say “I am Humble.” It’s ridiculous and wonderful. Also still a huge fan of drinking charcoal lemonade, but I’m sure you guys are doing that.

What’s the biggest misconception about you?

That I am an animatronic being operated by a team of puppeteers. Also, most people think because I’m prissy and high falutin’ that I’m from the city. I am actually from an Almond Farm in northern California. But also, I am not a large, Snuffleupagus-style puppet.

What’s your favorite thing to hear after you perform?

“You are very handsome. Would you like to go make out and talk about Nora Ephron films?”

Least favorite thing to hear after you perform?

Other than you, of course, who is your favorite comedian to watch and why?

There are a bunch of young gay comics who are doing cool, interesting things these days. I particularly love Sam Taggart, a weird, absurdist comic who’s as unexpected as Andy Kaufman and as gay as Andy Cohen. He’s great. Also, Bowen Yang and Matt Rogers who host the Las Culturistas podcast in New York make me laugh more than just about anyone these days.

Ask yourself a question.

Are you glad you’re going to Atlanta during the winter, when you’re less likely to sweat through your clothes while performing?

No. That’s a mean question. How on earth could you say such a thing?

If your comedy was a game you play on a long car trip, what game would it be and why?

Oh! This is so funny. My comedy is actually deeply rooted in a game I’d play on long car trips. In college and law school, I was on the Quiz Bowl team, a group of people who compete in trivia at other schools. On the way to tournaments we played a game called “GuyBall.”

It was basically 20 questions, but you scored points from asking the most interesting questions. So like,” “Are you a vegetable?” would earn you no points, but “Have you ever been inserted into an anus?” or “Does Katie Couric know who you are?” would get you points. It also had a lot of other rules.

Celebrity you’d want to be stranded on a desert island with?

The Rock. You know The Rock has stories, and eventually would get bored enough that he’d at least let me do oral stuff to him.

If 13 year old you saw you today, what would they say to you and where you are now?

Why didn’t you meet Anne Bancroft before she died?