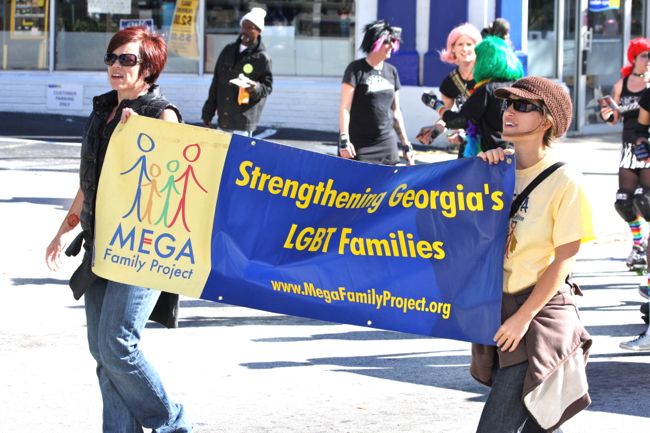 LGBT family support group MEGA Family Project is facing tough times. As its founder and leader since 2004 looks to step aside, she’s also pleading with supporters to bolster the group’s troubled finances with donations.

How serious is the plea for financial help? Executive Director Kathy Kelly asks for donations at least five times in a 13-paragraph letter she emailed to supporters on Friday.

Kelly launched the group in 2004 as the state went through a bruising battle over a proposed amendment to Georgia’s constitution banning same-sex marriage. Since, MEGA has grown to offer a variety of programs to support LGBT families, including socials, play dates, training and an annual conference.

But as LGBT businesses closed and non-profits struggled financially, MEGA experienced its own dire financial straits. Last July, Kelly said the group was cutting its services and needed funds to keep it afloat.

Now, Kelly says she’s in the process of scaling back her involvement and transitioning MEGA to a new leader. In Friday’s letter, Kelly says the group has hired a replacement and that she’ll remain in place for up to several months to mentor the new hire, which the group did not name.

“I have found a person who will work for the organization part-time as I mentor her to replace me. I have agreed to continue working for the organization without pay until this person is ready to take over my position. Since there is so much to learn, we imagine it will be months before the person is ready (we’ll announce the new person in a future e-mail),” Kelly says.