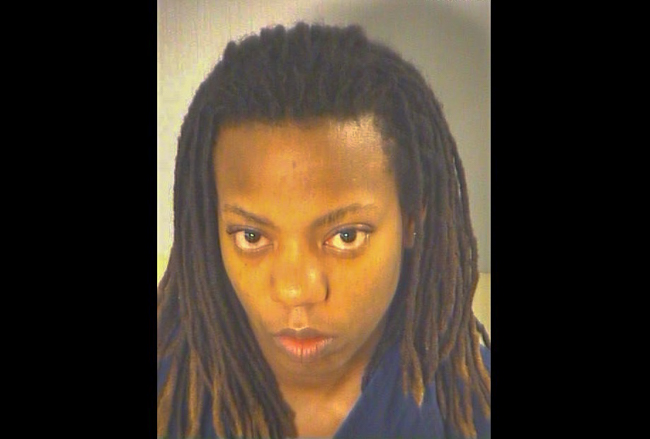 A metro Atlanta woman accused of stabbing her partner to death on Monday and shooting at police after a high-speed chase is also a person of interest in the disappearance of another partner seven years ago.

Joyce Marie Lewis-Pelzer (top photo), 42, allegedly stabbed a woman nearly 40 times at a Motel 6 in Conyers on Monday, according to the AJC. She died before she was loaded into an ambulance. The victim is 47-year-old Rosalyn Lewis, 47, according to the Rockdale Newton Citizen.

After interviewing witnesses, police issued a lookout to law enforcement agencies for Lewis-Pelzer and were concerned that she was fleeing to Florida. The Georgia State Patrol spotted her later Monday in Crisp County traveling south on I-75, according to a GBI news release.

“We gave them the lookout on the vehicle she was driving and based on the timing, we were hoping to get ahead of her,” Conyers police spokesperson Kim Lucas told the AJC. “Georgia State Patrol did spot her and did a fantastic job.”

State troopers tried to stop the car Lewis-Pelzer was driving but failed. The high-speed chase continued for about 10 miles. That's when state troopers again rammed her vehicle and stopped it, according to the GBI.

“Two Crisp County deputies approached the vehicle and at least one shot was fired at the deputies from inside Lewis-Pelzer’s vehicle. The two deputies returned fire, striking her. One of the deputies on scene was medically trained and rendered aid until EMS arrived,” the news release said.

Lewis-Pelzer was airlifted to Navicent Health Center in Macon where she is in serious but stable condition. No officers were injured in the incident, according to the GBI.

Conyers police told WSB-TV that they are also looking into whether Lewis-Pelzer is responsible for the murder of her a former partner who went missing seven years ago.

Shawndell McLeod disappeared in 2011. Her car was found abandoned several days later about 40 miles from her Atlanta home. DeKalb County Police Det. Henry Guest quickly zeroed in on Lewis-Pelzer as a suspect, according to True Crime Daily.

Lewis-Pelzer reportedly “had a frightening obsession” with McLeod, who worked with her at an Atlanta nursing home.

“I interviewed a lot of people,” said Det. Guest. “Between three or four of them told me that Shawndell was very afraid of this lady.”

Detective Guest says Pelzer had reportedly fallen in love with Shawndell at first sight. And Shawndell entered into what's believed to have been her first romantic relationship with a woman.

“She said she wanted to try a gay lifestyle,” said Det. Guest.

When McLeod tried to end the relationship, Pelzer reportedly threatened to end both their lives in a murder-suicide, according to True Crime Daily. This was a few weeks before McLeod went missing.