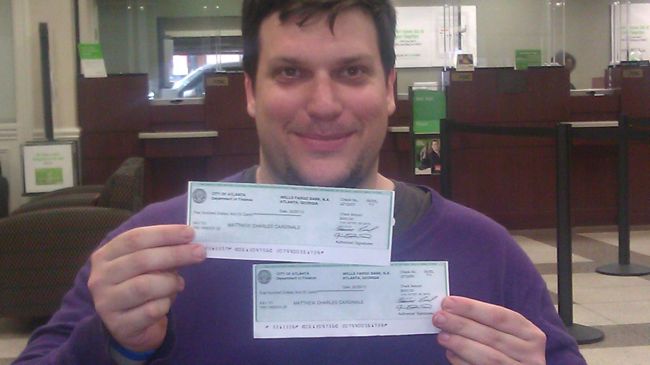 Those two checks had to sting. The City of Atlanta, no stranger to dishing out cash to gays it offends, cut $1,000 worth of checks to gay journalist and provocateur Matthew Cardinale, who took his white dude rapping skills to court and won.

Cardinale proudly displayed the checks in a Facebook post on Friday, celebrating his victory over the city and relishing that it anted up to cover his legal fees.

Received my two checks from the City of Atlanta, totaling 1,000 dollars, to reimburse me for legal expenses incurred as part of the secret vote lawsuit and Cmte Briefings lawsuit. My first pro se financial settlement from a government agency! The City Council disclosed its secret vote, opened up its Briefings, and then paid me back for the cost of making them do those two things

Cardinale sued the City Council, alleging that it violated the state’s Open Meetings Act. The case reached the Georgia Supreme Court, which in a 4-3 ruling last year agreed with Cardinale. He sued again over a closed-door meeting top city officials had with an LGBT police advisory board to discuss the botched Eagle raid.

What had to sting the most: The council, and gay City Council member Alex Wan, had to approve the payouts to Cardinale. Wan and Cardinale have tangled in the past over Wan’s voting record and again recently over Wan’s proposal to scrub Cheshire Bridge Road of its sexy parts.

The city is no stranger to cutting checks to gay Atlantans. It’s paid $1.475 million to settle three lawsuits related to the Eagle raid. Then there are those settlement checks to gay attorney Dan Grossman.