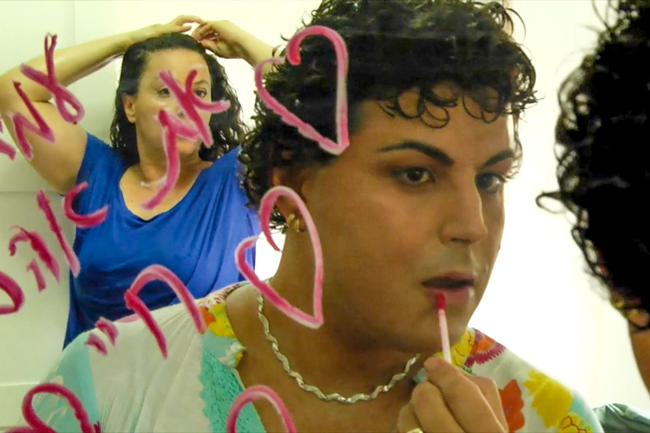 It’s the biggest film festival Atlanta sees all year, one of the biggest Jewish film festivals in the world, and known for its inclusivity and broad appeal across demographics. The Atlanta Jewish Film Festival opens a month of compelling LGBTQ-inclusive films, characters and themes of queer interest this week.

When the 19th annual festival opens on Feb. 6, the evolution of “gay film” inclusion is apparent in its lineup. No longer relegated to “special interest” films, the gay character in Holy Lands is part of the fabric of a wider narrative. Jonathan Rhys Meyers plays David, the successful gay son of a doctor played by James Caan. Instead of playing up David’s orientation, the film plays the gay character matter-of-factly as just one of the doctor’s strained relationships. That’s progress.

And not ones to include only the same-gender loving viewers in its audience, Atlanta Jewish Film Festival also presents transgender issues in the documentary Family in Transition. When the patriarch of a family comes out as a woman, changes in the whole family play out alongside her own. The fact that they live in conservative Israel adds another level of complexity to the story.

A third film doesn’t feature any LGBTQ characters, but it is decidedly queer. Fans of the original Saturday Night Live cast will not want to miss Love, Gilda. No one on that groundbreaking show embodied the encouragement to “Be yourself,” “Be different,” and “Embrace diversity” than Gilda Radner. Her meteoric rise, example-setting love with Gene Wilder and hope-in-tragedy end will elicit tears of joy and loss that every queer will adore.

Find a peek below at our highlight selections. You can click the titles for tickets and more info, or visit AJFF for the full lineup .

A family from a traditional Israeli town is forever changed after their father shares his desire to live his life as a woman, after 20 years of marriage, in Family in Transition (top photo). Amit’s wife, Galit, chooses to stay with her husband, keeping their family with four children together. This candid portrait reveals, in unflinching detail, the family's struggles against social stigma and other difficulties, as they try to maintain their equilibrium in light of Amit's transitioning. Shot over two years, Family in Transition delivers an emotional punch in its sensitive, intimate depiction of a courageous family facing the very personal realities of a hot-button topic. Best Israeli Film winner at the DocAviv Film Festival.

With humor and an all-star cast, writer and director Amanda Sthers presents a universal story of love and acceptance based on her critically acclaimed novel of the same name. James Caan, Rosanna Arquette and Jonathan Rhys Meyers (photo) star in Holy Lands, a family drama about a Jewish-American cardiologist who leaves everything behind to become a pig farmer in Israel. Though Dr. Harry Rosenmerck (Caan) tries to leave his former life behind, it is his wife (Arquette) with a terminally ill diagnosis, who brings his family back to the forefront, alongside his estranged son David (Meyers), a successful gay playwright, and his daughter Annabelle, a professional student.

Through laughter and tears, trailblazing Saturday Night Live comedienne Gilda Radner narrates her too-brief life story in the affectionate Love, Gilda. With childlike wonder and boundless energy, Radner poured her soul into every wacky character she created, from her start at Chicago's Second City to her instant celebrity on the late-night-TV, live-comedy experiment SNL. Interspersed with performance clips and backstage glimpses, friends and colleagues share their fondest memories of the comedy icon and her enduring impact. With personal recordings, journal entries and photos, Radner reveals her private side: insecurities, struggles with success and relationships, her enduring romance with Gene Wilder, and heartbreaking battles with bulimia and ovarian cancer. What emerges is a privileged look at a beloved, brilliant comic superstar who exuded positivity even in the darkest times, and who continues to inspire a new generation of fans and performers.

Atlanta Jewish Film Festival screens at multiple venues around Atlanta Feb. 6 – 26 with special guests and speakers often part of the mix. Click the titles above for tickets and more info, or view the full lineup .

This article originally ran in Q magazine. Flip through the latest issue below.