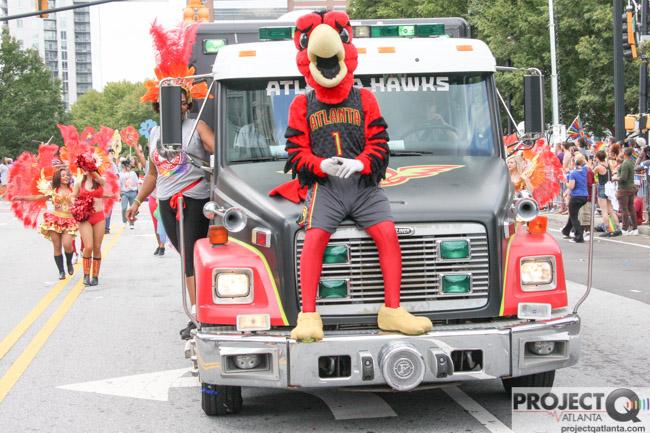 The Atlanta Hawks are the latest pro sports team to dedicate a game to its LGBTQ fanbase, as the team hosts a Pride Night on Valentine’s Day.

The Feb. 14 game at the newly-remodeled State Farm Arena will feature a number of nods toward the city’s LGBTQ residents.

“During our inaugural Pride Night, the Hawks organization hopes to amplify the message that love shows up in different ways and should only be defined by acts of compassion, kindness and dignity for all,” Nzinga Shaw, the team’s chief diversity and inclusion officer and senior vice president of community, said in a press release. “Pride Night is a signal to the Atlanta community that we are committed to building bridges, not walls.”

The night begins with a pregame party featuring DJ Beelax from 96.7 The Beat. Tickets purchased through the team’s Pride Night page include entry into the party and the game, as well as a $10 credit toward food or drinks or purchases from the Hawks’ team store.

‘90s house music hitmakers Robin S. (“Show Me Love”) and Crystal Waters (“100% Pure Love”) will perform during halftime alongside a select group of the city’s drag entertainers. Plus, the iconic “ATLANTA” letters at the arena entrance will be lit in rainbow colors.

“Hawks games at State Farm Arena are an inclusive environment that welcomes everyone in the name of love,” Atlanta Hawks CEO Steve Koonin said in a press release. “Along with being a history-making Pride game for us, this will be the best Valentine’s Day date night in the city for all of our fans.”

Former President Jimmy Carter and First Lady Rosalynn Carter will also be in attendance to receive an honor as part of the team’s 50th anniversary celebration.

Last October, the team partnered with the Boy Meets Girl apparel brand to create a line of Pride clothing promoting LGBTQ inclusion (photo below). The line will be available in the Hawks team store along with rainbow-numbered jerseys.

The Hawks took part in the Atlanta Pride parade last October for the fourth consecutive year.

The team honored Transformation Journeys Worldwide on Feb. 6 for its transgender-focused efforts on diversity and inclusion. The event also included a discussion with Jason Collins, the NBA’s first openly gay player.

The Atlanta Hawks face the New York Knicks on Pride Night on Feb. 14 at 7:30 p.m. at State Farm Arena. Tickets including pregame party and $10 credit can be purchased here.