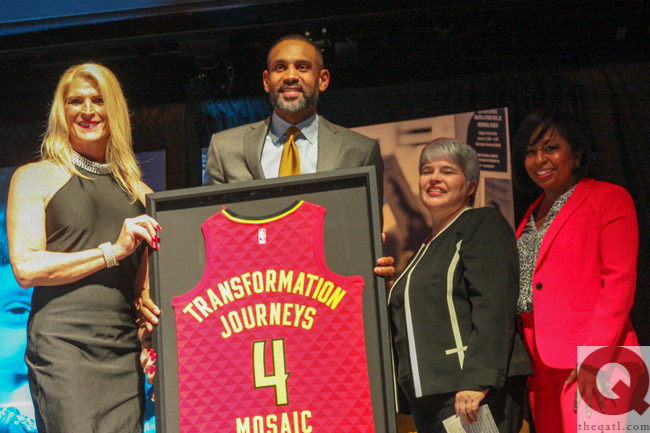 The Atlanta Hawks honored Transformation Journeys Worldwide for its transgender-focused efforts on diversity and inclusion in the workplace.

The award was presented during the team’s 4th Annual MOSAIC Diversity Symposium at State Farm Arena on Wednesday. The event also featured a discussion with Jason Collins, the NBA's first openly gay player.

“They are allies inspiring change and celebrating the unique gifts we each bring to this buffet called life,” said Andrea Carter (top photo, far right), the team’s vice president of corporate social responsibility and inclusion.

“We are committed to creating an environment of diversity and inclusiveness at work and at play,” said Grant Hill (top photo, second from left), former NBA player and current vice chair of the Hawks board of directors.

“It’s our mission to help organizations dispel the ‘us and them’ perspective regarding individuals like myself who are seen as different,” she added.

“Because we’ve had the privilege of partnering with you along this journey, we know and have seen firsthand how you do lean in firsthand to those courageous conversations,” she said.

“And we get a chance to see how you create a space for conversations that allow people to connect with empathic relationships with those who are marginalized and misunderstood.”

Soledad O’Brien interviewed Collins, who played four seasons for the Hawks before he came out.

Collins (second photo), who retired in 2014, talked about being in the closet and dating women.

“I thought that if I would find the right girl, that would make all these feelings go away,” he said. “I was forced to look at myself in the mirror during the [2011] NBA lockout and ask if this was what I wanted to do for the rest of my life.”

Collins said there are little things people and businesses can do to make LGBTQ employees feel accepted.

“In the workplace environment, it’s something as simple as having a rainbow pin at your office,” he said.

He also encouraged straight employees to talk about their LGBTQ friends and family.

He said that out tennis players Martina Navratilova and Billie Jean King made his path easier, and that he had no problem playing that role for someone else.

“As long as someone else doesn’t have to wait until 33, 34 years old to live their authentic life, then so be it,” he said.

“It’s hard enough to be a professional athlete without that. If I can make the path easier to someone else to have a positive impact on someone’s life, that’s what it’s all about,” he added.

Collins said that homophobic jokes foster an environment that can lead to “real world consequences” like the attack on black gay actor Jussie Smollett.

“People die because of racism, because of homophobia every day around the world. So when there are those jokes being made, it’s not right,” he said.

Collins said he knows current pro athletes who are in the closet.

“My hope is that they do come out, but it’s up to all of us to create an environment that when they do step forward, they’ll be celebrated and they’ll be able to perform at the highest level,” he said.