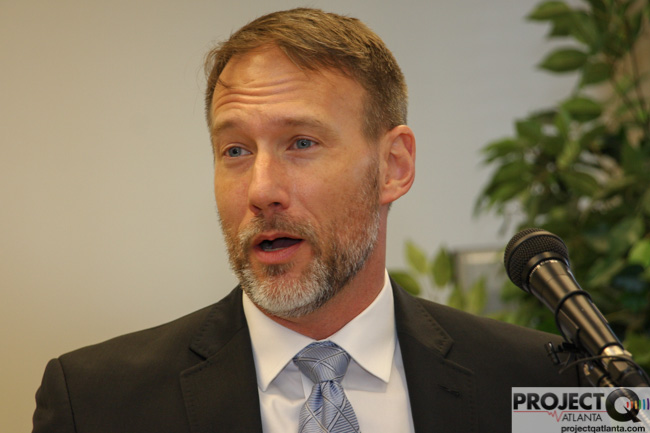 Fulton County is partnering with Emory University and Joining Hearts to tackle a syphilis epidemic among gay and bisexual men.

The sports-themed “Get in the Game” campaign launched during Black Gay Pride weekend with a goal of getting all 30,000 gay and bi men in Fulton tested by Atlanta Pride weekend, which is Oct. 12-13. Gay and bi men account for nearly 70 percent of new syphilis infections nationwide, according to the Centers for Disease Control & Prevention.

Syphilis is a “major problem” in Atlanta, according to David Holland (photo), chief clinical officer for medical and preventative services at the Fulton County Board of Health.

“We knew we needed to do something big and something bold so what we decided on is a short-term campaign to get as many people tested as possible,” he told Project Q Atlanta.

The syphilis rate among gay and bi men is “astronomical,” according to Jerry Henderson, Joining Hearts board president.

“It’s pretty bad — especially in the African-American community — to where we see the rates seem to be increasing,” he said.

Joining Hearts contributed $17,500 to the effort.

Testing events will be held at Mixx, Midtown Moon, Blake's, Ten, Zocalo, the Sanctuary, Heretic and Friends on Ponce. The Fulton County Health Department will continue to offer testing at its facilities and through mobile units.

The immediate purpose of the campaign is to get people tested and treated to reduce the burden of the disease. The long-term purpose is to destigmatize testing, according to Holland.

“We’re doing this around the two gay Pride events to highlight the idea of people protecting their partners,” he said. “We want people to be out there having fun — we just want it to be safe. That’s the genesis of the name of the campaign. We want people to get tested, get treated if necessary, and then go get in the game.”

People should still register on the Get in the Game website if they’ve been tested at their doctor’s office or by any other means, Holland said.

Go to Get In The Game for more information on registering for the campaign and ordering an at-home syphilis testing kit.