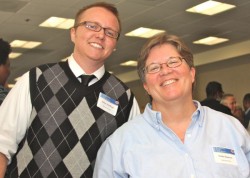 At least six LGBT activists from Atlanta will be in the White House on Wednesday as President Obama hosts his third LGBT Pride Reception amid mounting pressure from activists appreciative of his track record but wanting him to come out in favor of same-sex unions. The event, set for June 29, will be the second high-profile gay meeting for Obama in a week. The president was in New York City on Thursday for an LGBT fundraiser in which he was heckled by supporters of gay marriage who urged him to support the issue. When Obama welcomes LGBT activists into the White House on Wednesday, six Atlantans will be among the crowd, including Trisha Clymore (top photo right), co-president of InterPride and an Atlanta Pride board member; JP Sheffield (top photo left), Atlanta Pride executive director; Jeff Graham (second photo), Georgia Equality executive director; and Melinda Sheldon (third photo), Georgia Equality operations manager. Daniele Xenos, a volunteer with the Atlanta Lesbian Health Initiative, and her partner Sherry Lambert, are also attending, according to the GA Voice. “It is incredibly exciting and I was definitely surprised,” Sheffield says. “I didn’t really think it would be an opportunity I would ever have. It’s a little surreal. Regardless of your politics, it is hard not to be a little enamored with the idea of going to the White House and meeting a president.” 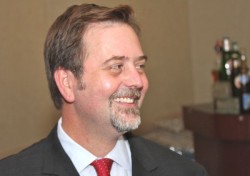 The visit inside the White House marks a first for Graham, though activism at the center of the nation’s political power is nothing new for the longtime advocate for LGBT and HIV issues. He was arrested outside the U.S. Capitol about six years ago during a rally on HIV issues. Graham says if given the chance during the reception, he’d ask Obama to ratchet up his support for the Employment Non-Discrimination Act, which is a proposal that would prohibit discrimination against employees based on their sexual orientation or gender identity but has languished in Congress for years. “I would tell him that while I am very appreciative of the work his administration has done to include the LGBT community in so many governmental programs, that our community is looking for more aggressive leadership as president to push forward [ENDA],” Graham says. “That’s a piece of legislation, especially in tough economic times, that is the only guarantee that they would not be fired based on their sexual orientation or gender identity. So I would urge him to be more vocal in his support for ENDA.” 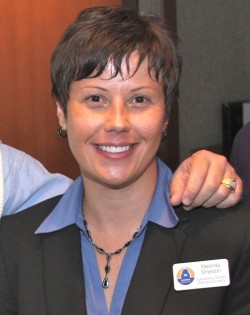 Clymore says it’s important that the White House reception include local Pride organizers from around the U.S. “A lot of Prides in the U.S. particularly, they are seen as more parties and celebrations,” Clymore says. “But when you look at the amount of people that Pride garners, it is in the thousands. There is more ability to garner resources in that mass setting of people than a lot of organizations can touch. As long as there is not totally equality in the world, then Pride continues to have a very important purpose.” Clymore says she would thank Obama for his work so far on LGBT issues. “I would tell him thank you for repealing ‘Don’t Ask, Don’t Tell.’ Politically it was hard but the right thing to do. And it is my hope that he is able to do the same thing on marriage, but that is a harder issue. I would thank him for surrounding himself with LGBT people. He has hard decisions to make and I understand it is not always easy to say we are going in this direction and I feel like he at least tries,” she says. Clymore and Sheffield will also attend an LGBT Community Leaders Briefing on Wednesday before the Pride reception. When the four Atlantans walk into the White House, it will add to the list of local activists that have attended significant gay events with Obama inside or near the White House. In December, four Atlanta residents – Danny Ingram, Jeff Cleghorn, Don George and Molly Elizabeth Simmons – attended the signing ceremony when Obama inked the “Don't’ Ask, Don’t Tell” repeal. Last July, two HIV activists from Atlanta -- Paul Plate, Positive Impact’s executive director, and Craig Washington, AID Atlanta’s prevention programs manager – were on hand when Obama unveiled his National AIDS Strategy. In 2009, Obama named part-time Atlanta resident Harry Knox, a former executive director of Georgia Equality, to the advisory council for the White House Office of Faith-Based & Neighborhood Partnerships.