This Atlanta gay wants you to shut up about AIDS 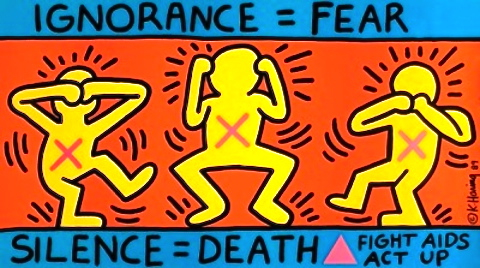 Who would dig up their dead best friends and beat young gay guys with the decaying corpse? You would, according to gay Atlanta blogger Mark King, the spitfire whose latest column is causing a national stir.

In a recent column now gaining national traction, King’s Stop Bludgeoning Young Gay Men with Our AIDS Tragedy asserts that you can go ahead and just shut up with your stern warnings based on gay history and experience. The age of “Silence Equals Death” is dead, he declares. So just when you are well enough from shell shock to stop ignoring the era-defining crisis, keep it to yourself.

I will not dig up [King’s late friend] Lesley’s body and beat young gay men with his corpse. Lesley didn’t perish so I could use him as a scare tactic. He wasn’t a cautionary tale. He wasn’t a martyr. He was a man with the same passions and faults as anyone else, and I won’t use his death as a blunt instrument.

Plenty of us are more than happy to rob graves, however, in an attempt to frighten gay men into acceptable behaviors. This kind of horror-by-proxy happens all the time. Concerned but misguided gay men of a certain age hear whatever the latest HIV infection rates are, and they pull the AIDS Crisis Card.

“If their friends all died like mine did, maybe they would think twice before having sex without a condom,” goes a typical remark, drenched in self pity and tenuous logic.

So frozen in time is our victimhood, it hardly allows for the facts of the here and now. Young gay men are more aware of HIV than my generation ever was. They simply relate to it differently, having come of age since the advent of successful treatments.

King goes on to say that, other than taking his meds, HIV no longer affects his day-to-day life. He also names gay young writers who experience the disease in a different reality. That all of those examples are already HIV-positive goes unstated.

The column gently acknowledges the role of history, but it warns that scaring guys into less risky behaviors is about as likely as scaring you straight. Several comments in a lively discussion under the Huffington Post grab of the piece take him to task. That includes the founder of the local AIDS action group Team Friendly Atlanta, Randy Prophater.

“This is not the way I see the ongoing battle over HIV/AIDS. It is in remembering and honoring the past that we are able to move forward. I am HIV+, taking my Meds daily. I will live a long and healthy life, as long as I take care of myself.

“However… Do we not warn the potential diabetic of habits that will lead to adverse complications and may result in multiple tests and administration of insulin? Or caution the children of parents will hereditary heart issues to stay active and try to moderate their diet?

“Why is it ok for us to say, 'Don't treat me different or stigmatize me,' but not to be the voice of experience to help guide those that follow?

“As a member in a grassroots organization that is dealing with HIV in the Atlanta community, I find this is but a starting point to a greater conversation. One which is too often not talked about, like the uncle that suffered consumption.

“Bring the issue out of the darkness and lets start a conversation, please.”

Luckily, King doesn’t completely follow his own advice. His award-winning annual World AIDS Day repost Once, When We Were Heroes went up right on schedule for the Dec. 1 commemoration. Also on tap last week were some other thought-provoking reality checks that don’t shut up about an often grim AIDS history, either. Don't miss what you've forgotten about AIDS and what used to matter.