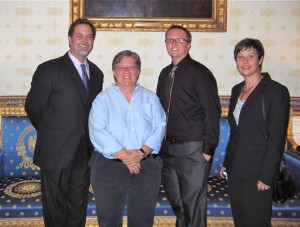 At least six LGBT Atlantans were on hand Wednesday in the White House as President Barack Obama told a few hundred gay activists that he’s “met my commitments to the LGBT community” during his third annual Pride reception.

The Atlanta participants shook Obama’s hand, one veteran received a personal thank you for her military service, and another talked football with Vice President Joe Biden after the president delivered a nearly nine-minute speech in the East Room touting his administration’s work on LGBT causes.

“I don’t have to tell the people in this room we’ve got a ways to go in the struggle, how many people are still denied their basic rights as Americans, who are still in particular circumstances treated as second-class citizens, or still fearful when they walk down the street or down the hall at school. Many of you have devoted your lives to the cause of equality. So you all know that we’ve got more work to do,” Obama told the crowd.

“But I think it’s important for us to note the progress that’s been made just in the last two and a half years. I just want everybody to think about this. It was here, in the East Room, at our first Pride reception, on the 40th anniversary of the Stonewall riots, a few months after I took office, that I made a pledge, I made a commitment. I said that I would never counsel patience; it wasn’t right for me to tell you to be patient any more than it was right for folks to tell African Americans to be patient in terms of their freedoms. I said it might take time to get everything we wanted done. But I also expected to be judged not by the promises I made, but the promises I kept,” he added.

Obama then recited his administration’s accomplishments, including signing an inclusive hate crimes law, an executive order regarding the treatment of gay couples in hospitals that accept Medicare and Medicaid, lifting a travel ban on people with HIV, repealing the military’s “Don’t Ask, Don’t Tell” policy, and supporting efforts to repeal the federal marriage ban called the Defense of Marriage Act. 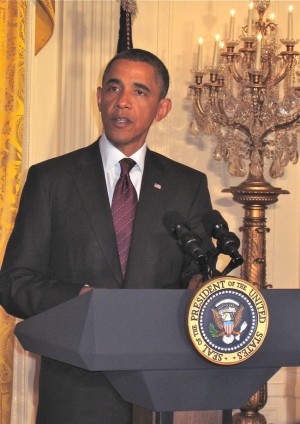 The remarks (video above), in part, mirrored what Obama said earlier in the day during a nationally-televised press conference. Obama was asked about same-sex marriage three times; each time, he declined to discuss his position. “I am not going to make news on that today. Good try, though,” he quipped.

On Wednesday, Graham boasted on Facebook that he stood next to gay singer Rufus Wainwright, shook hands with Obama and was proud to watch as the president thanked Sheldon for her military service.

Sheffield posted that he shook hands with Obama and talked with Biden about the Pittsburgh Steelers. He also joked that he watched another participant swipe a plate from the event that offered “delicious tiny strawberry cupcakes.”

“I watched this one lady at the reception stick a plate in her purse to take home. I swear, you can’t take some gays anywhere,” Sheffield wrote.