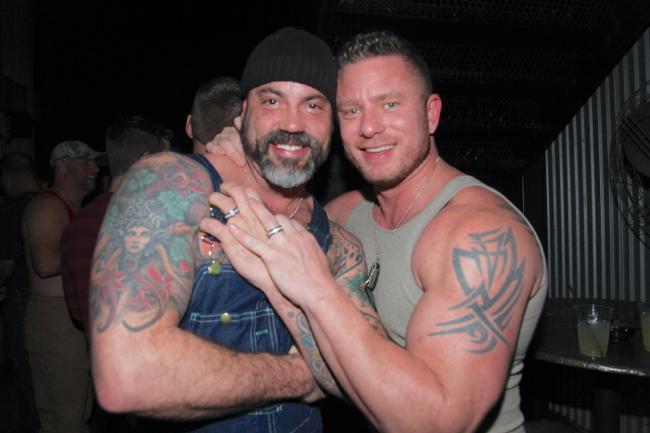 Let’s face it. It’s hard out there for anyone in the dating pool. And yeah, that goes for HIV-positive guys and their own set of five biggest dating questions for poz gay men.

When should I tell a potential partner I have HIV? Do I legally need tell my date I'm HIV-positive? How do I get over my fear of rejection? If we're both HIV-positive, do we still need to use condoms? What if the condom breaks?

Tough stuff? Sure, some things are easier asked than answered. And even if the answers sound simple, putting them in practice can be more complicated. Luckily, HIV conundrums are no longer insurmountable if you know where to look, like toward Harding (photo, right) and Rage (left) for their version of making it work.

A revealing expose on the gay Atlanta couple includes their own answers to most of those questions. It also exposes many of their personal secrets. How many times had they met in person before they moved in together? The answer and accompanying story may surprise you. The interview also lays bare their sex-positive take on life, romance, relationships and living as partners with opposite HIV statuses.

[Scotty] is positive, Charlie is negative.  This is something that quite frankly is quite taboo in the gay culture in that many men who are negative fear dating a man who is HIV positive for the obvious reasons (infection, health problems) and going beyond that (social stigma, embarrassment).

What Scotty and Charlie want is for people to understand this disease and the risks of it, but at the core of it if you love someone you can be there for them and help them along the way without judgment.

The couple keeps it real in the interview. They know first-hand that personal nuances mean there’s no one-size-fits-all approach to navigating sex and relationships, but that some truths they’ve learned are worth sharing. Harding stops some fallacies in their tracks.