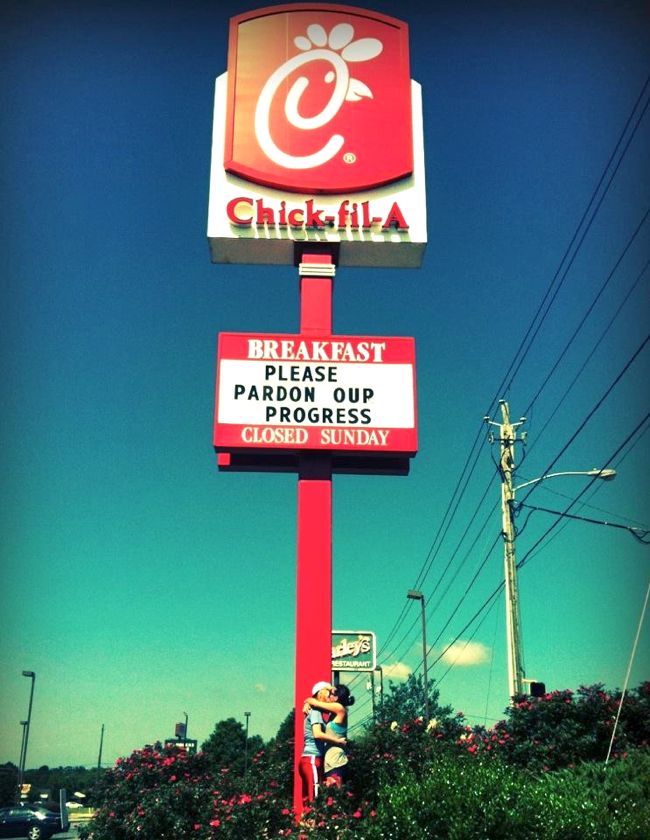 VIEW MORE | Atlanta gays give big kiss to Chick-fil-A [photos] As gays across Atlanta prepare to kiss their way through protests of Chick-fil-A on Friday, a lesbian couple beat them to it by laying down a same-sex smooch and capturing the moment in a touching photo. Lesbian couple Lauren M. and Ana C., who live in Atlanta, were caught up in the moment on Sunday when they were in Columbus, Merrell’s hometown about 90 minutes from Atlanta. With the Chick-fil-A controversy swirling around them, they decided to stage their own impromptu protest. So they embraced under the sign outside a Chick-fil-A and kissed as a friend snapped a photo. “We thought the reader board was very ironic given the recent light shed on their ass-backwards ideologies and we used it to send what we feel is a powerful message: We will win this battle for equality in all 50 states without your support, Chik-Fil-A,” Merrell says. The moment went off without a hitch, though Merrell was a little concerned about their safety. “Even though it's my old stomping grounds, I did fear for my safety for a moment while our friend who was taking the picture scrambled to get the perfect shot. It was a peaceful moment and I was surprised to find it received a peaceful response,” she says. The kiss protest is one of several reactions from Atlanta consumers upset with Chick-fil-A, including “Real Housewives of Atlanta’s” Kim Zolciak expressing her disgust, Emory chiding the company as Kennesaw State students want it evicted from campus, East Atlanta’s Flatiron Restaurant firing back at the “Chik-Fil-A-Holes” and lesbian-owned Urban Cannibals offering Two Chicks-fil-A Sunday Brunches. It also came five days ahead of National Same-Sex Kiss Day, which includes events at Atlanta Chick-fil-A’s here, here, here and here. There's one in Macon, too. And then there’s one guy who offers a reason why gay men in Atlanta won’t boycott Chick-fil-A. (Editor's note: The last names of the two women were redacted at their request.) Photo by Lauren M.