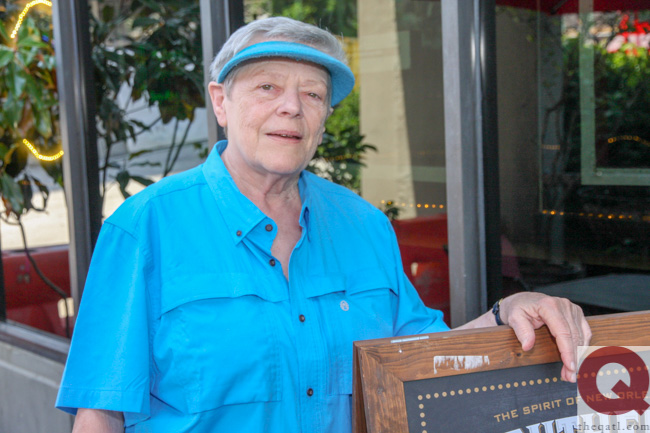 The owner of gay bar Model T says the bar is being forced out of its longtime home near the Beltline in the Old Fourth Ward and will relocate this summer.

On June 2, the bar said in a Facebook post that its lease at the Ford Factory Lofts – on Ponce de Leon Avenue next to Ponce City Market – was not being renewed, so the bar would close at the end of the month. But Model T owner Jill Darmer (top photo) said the lease has been extended – for another month.

“I thought it would be the end of this month because [the landlord] told me no, I couldn’t do July. Then we got the rent statement [which] didn’t say anything about that, so we’ll go until the end of July,” Darmer told Project Q Atlanta.

Darmer said the bar is a victim of 725 Ponce, a $155 million project now under construction next to the bar (second photo). The development will include a 12-story office building, a redeveloped Kroger and new commercial space in Ford Factory Lofts, according to the Atlanta Business Chronicle. The project appears to be crowding out longstanding businesses. Cameli’s Pizza closed last year after two decades, with owner George Cameli directly citing the 725 Ponce project as the reason in an interview with the AJC. Now Cameli’s next door neighbor, Model T, appears to be on the chopping block.

'The writing was on the wall'

Model T opened in 1992 and Darmer took over ownership in 1995, so she’s been around to see the bar evolve over the decades.

“It used to be a bar owner’s association where we all paid dues, and fortunately it used to be many years ago that women didn’t want men in their bars and men didn’t want women in their bars,” she said. “The bar owner’s association tried to bring everybody together, and we met once a month. So things have changed so much for the better. People don’t understand that gay or bisexual or whatever it is doesn’t denote character — it’s just a sexual preference, that’s all there is to it.”

Another of those changes was more development in the area, including Ponce City Market and the BeltLine. Darmer said rent has steadily increased, telling the Georgia Voice last year that it nearly doubled in the last three years, from $3,000 to $5,500 per month.

“People are moving out because the rent’s going up, and I guess that’s just the future of what’s going on. You can’t stop progress, or what they think is progress. They didn’t mind me being here when it was nothing but the pimps, the hustlers,” Darmer told Project Q.

“The writing was on the wall as soon as Don Lippman — who owns this building — got in cahoots with the corporate bunch. He made it an issue out of things that … he was just looking for things. What disturbs me most of all is to give it up because somebody wants to put [in] a glass shop full of trinkets. It’s totally nonproductive for the community — gay, straight, whatever. I’m just a small voice talking to large conglomerates, which has never bothered me. They wanted me out of here long before now,” she added.

Darmer also claimed that she wasn’t given an offer to stay.

“If you think somebody’s been so good to them, they would at least come up with something exorbitant that I couldn’t do. So that irritates me. I wasn’t even in the running,” she said.

Project Q Atlanta reached out to Model T's landlord, Don Lippman of D.E.L. Development Corporation, and will update the story if he responds.