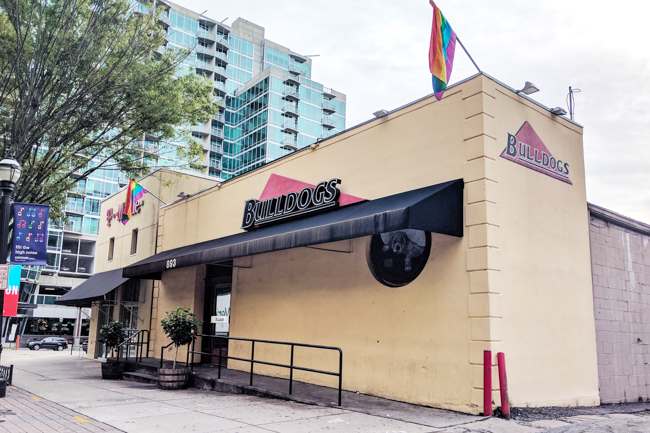 In 1978, when Michael Clutter and his business partner Jerry Pyszka decided to open a gay bar in Midtown and call it Bulldogs, they had no idea what to expect.

There was no moving on in this case. The black gay bar celebrates its 40th anniversary on July 28 with a weekend of events to back it up.

When Clutter and Pyszka found the property, it wasn’t much to look at.

“It was an empty building that used to be a strip bar,” Clutter says. “It had been empty for a couple of years, and I thought it would be a great spot for a gay bar.”

They signed a lease, and Clutter handled the business side while Pyszka — who managed a gay bar at the time called Mrs. P’s — handled the rest.

“Bulldogs was the pre-eminent cruise bar on the strip and renowned for its Sunday afternoon tea dances and outdoor barbecues,” said Dave Hayward, coordinator for LGBTQ Georgia history organization Touching Up Our Roots. “It became the place to meet ‘Mr. Right Now,’ especially around 1 a.m. when people would migrate from the other bars, in hopes of meeting a new friend for the evening.”

Crime in the neighborhood affected Bulldogs customers, who fell victim to muggings.

“There were times I wasn’t sure if I wanted to continue operating it,” Clutter remembers. “But I had founded it, and it was like my baby. I didn’t want to give it up, so we stayed through those hard times in the ‘80s.”

“Those hard times” refers to the early days of the AIDS epidemic. Clutter and Pyszka lost numerous friends, employees and customers. Eventually, the disease claimed Pyszka.

Hayward says Pyszka was one of the first openly gay people to operate one of the city’s gay bars.

“We celebrate him for being the forerunner for LGBT owners and community organizers today,” Hayward says.

Living through the worst years of the epidemic instilled a resolve in Clutter.

“Having all my really close friends pass away kind of bonded me to it even more, and I wanted to hang onto the place because of all the memories it had,” he says.

“We had several black employees, and they started inviting their friends in, and it evolved into where it’s maybe 80 or 90 percent black now,” Clutter says. “That wasn’t a specific plan or anything; it just kind of happened that way.”

The business has thrived since the 1990s and avoided being driven out of the neighborhood by new development like other Atlanta gay bars. Clutter buying the land in 1988 played a big part in that.

“Since that time, I’ve had several offers from people that wanted to bulldoze it and put up a high-rise,” he says. “But I really didn’t know what else to do with my life. I loved that place. I worked seven days a week because I loved it. I liked going into work every day, and I loved my employees and customers.”

Still, Clutter, who turns 70 in January, reached a point where it was time to move on. Luckily, he had someone in-house ready to take the reins.

Brent Cochran-Maddox started as a doorman at the bar in the late ‘90s and quickly moved up the ranks to become general manager. He took over sole ownership last year.

Cochran-Maddox chalks up the bar’s longevity to the consistency of the employees and the business, and to the loyalty of the patrons.

“Most of my staff has been here for 10, 15, 20 years,” he tells Q. “So when you have had and are able to maintain an extended period of consistency, everybody knows what they’re getting. There’s no surprise. Holiday weekends we don’t go crazy on the prices. We stay open until we can regardless if there’s one person in there or 200 in there.”

Clutter is enjoying retirement in Atlanta and has watched the bar come a long way since finding that old empty building in a very different Midtown in the late ‘70s. He says Cochrane-Maddox is the right fit for the bar and the community

“He was the perfect guy to buy it from me, Clutter says. “I hope he operates it for another 40 years.”

Bulldogs is at 893 Peachtree St. NE. They celebrate 40 years in Atlanta with events on July 28.

This article originally ran in Q magazine. Read the full issue below, and pick up your copy around town.