The LGBT group of bands you may know best from Pride parades ups its ante for Sunday’s “Bravo! A Night at the Opera.” AFB welcomes visiting members of the Lesbian & Gay Band Association for a bigger-and-better concert than ever before.

Project Q Atlanta is giving away a pair of tickets to Sunday’s concert. Read to the end and find out how to enter.

With guest musicians from Charlotte to Chicago, Phoenix to Philly, the normally 35-piece AFB Concert Band (top photo)—AFB also has a marching band, a jazz ensemble and a color guard—takes on 20 additional instruments from around the country and takes on more challenging material as a result. 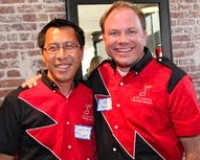 “It’s the largest number of people we’ve ever had in a concert,” says AFB President Cliff Norris (second photo, right). “Having more people in town helps us perform and explore pieces we normally just can’t fulfill. The music that we’re playing is more challenging, so it’s even more exciting for us as musicians.”

And “Opera” brings the drama, passion, pageantry and the story-telling that the band was looking for, Norris says. Expect challenging classics like Wagner’s “Lohengrin,” Mozart’s “The Marriage of Figaro,” Verdi’s “Nabucco,” Smetana’s “The Bartered Bride,” Berlioz’s “Damnation of Faust,” Kabalevsky’s “Colas Breugnon,” and Puccini’s “Turandot.”

“The world of opera was a natural,” he says. “It’s grand in scale and exciting for musicians to play. It’s a challenge for us to grow musically as an organization, and tackling this literature opens the door to doing larger stuff in the future.”

A reception follows the concert at First Presbyterian Church of Atlanta, giving the audience a chance to meet the musicians, which Norris says grows each season.

“With each concert cycle, we’ve been adding new people,” he says. “Two years ago, we had about 20 musicians, now we’re at 35, and we’re always looking for new members.”

So do you have an instrument hiding in the closet? “It needs to come out!” Norris laughs. “If people come to the show and enjoy it, please consider joining us. Our community can be so separate sometimes. We have men, women, all different ages and professions. It’s something you don’t see every day in the gay community. It’s really a fun thing to be involved in.”

For just $10–$5 for students and seniors—you can buy your tickets online now.

Project Q Atlanta is giving away a pair of tickets to the April 3 “Bravo!” performance {encode=”[email protected]” title=”E-mail us to enter for free tickets”}. Put your full name in the body of the e-mail and “BRAVO CONCERT” in the subject line. We’ll contact and announce the randomly-chosen winner on Saturday, April 2, and your tickets will be waiting at Will Call.

UPDATE: Congratulations Tony Black, whose name was selected to win a pair of tickets to the concert.