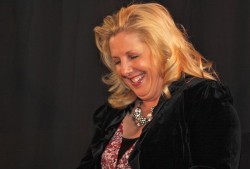 Atlanta filmmaker and longtime LGBT activist Cindy Abel is discovering two things in her quest to tell the stories of openly gay elected officials across the U.S.: It’s easy to find them; it’s far more difficult to create the documentary showcasing them.

So, Abel (top photo) took to friends and supporters on Thursday with a trailer for her in-the-works documentary and to ask them to support it financially. She’s collected about $50,000 of the $284,000 she’s hoping to raise to finish “Breaking Through,” and this week’s event at Radial Café was another step in the long process to fund the project. 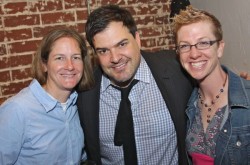 She was joined by Alex Wan, the first openly gay man on the Atlanta City Council; Ken Britt, a gay politico, fundraiser and activist who is assisting her effort; and state Rep. Karla Drenner, the first openly gay person elected to the Georgia General Assembly. Drenner and Wan will be profiled in the film. About 75 people were on hand for the event, which also included a question-and-answer session with Abel.

“Breaking Through” is supported by the Gay & Lesbian Victory Fund, which allows donors to make tax-deductible contributions. Abel says contributions can include cash, airline miles and hotel, and auto rental rewards points.