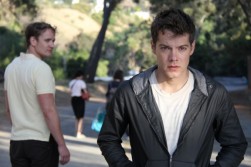 If you thought anonymous sex came out of hiding in public restrooms with the internet – with the occasional exception of George Michael – you’re wrong. “The Men’s Room” is only 15 minutes, but it packs a punch of male sexuality, intimacy issues, and the concept of public decency.

Here’s what the filmmakers say:

When Thomas ventures into a park for a sexual encounter with a stranger, he uncovers a striking complexity composed of desire, fear, and betrayal when one of his would-be anonymous sex partners turns out to be a cop.

“The Men’s Room” debuts on March 25 at Landmark Midtown Art Cinema at 4 p.m. and plays again at 5:30 p.m. The film screens alongside other LGBT short films in the Pink Peach Narrative Shorts, “The Maiden and the Princess,” “Pride,” “Half-Share,” “Time For Change” and “Hatch.”