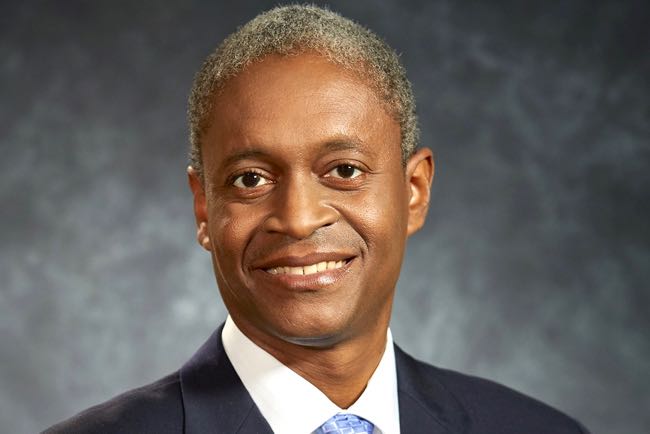 Raphael Bostic, a professor at the University of Southern California, will begin his term in June. His appointment was announced on Monday.

“I congratulate Mr. Bostic on his historic appointment,” Lewis said in a prepared statement.

“Atlanta is the cradle of the Civil Rights movement, so it is only fitting that our city be home to the first African-American head of a Federal Reserve Bank. While such an appointment is long overdue, I am proud that Atlanta is leading the way. Atlanta has shown that our nation succeeds when all voices and perspectives are heard and can come together to chart a way forward. Metro Atlanta and the South were hit hard by the Great Recession, and it is my hope that the Federal Reserve works to make sure the doors of opportunity are open to everyone,” Lewis added.

Thomas Fanning, board chair of the Federal Reserve Bank of Atlanta, said the 50-year-old Bostic is a “seasoned leader.”

“He is a seasoned and versatile leader, bringing with him a wealth of experience in public policy and academia,” Fanning, who is also chairman, president and chief executive officer of Southern Company, said in a prepared statement. “Raphael also has significant experience leading complex organizations and managing interdisciplinary teams. He is a perfect bridge between people and policy.”

Bostic said he looks forward to the new challenge.

“The Reserve Banks are vital contributors to our nation's economic and financial success,” Bostic said in a prepared statement.

“I'm excited about the opportunity to work with the Bank's well-respected staff in advancing the excellent reputation this organization has built over many years. In my role as president of the Atlanta Reserve Bank, I also look forward to confronting the challenges the Federal Reserve faces in today's increasingly global and rapidly changing economy,” he added.

From 2009 to 2012, Bostic served as assistant secretary for Policy Development and Research at the U.S. Department of Housing and Urban Development (HUD). In that Senate-confirmed position, Bostic was a principal adviser to the secretary on policy and research, with the goal of helping the secretary and other principal staff make informed decisions on HUD policies and programs, as well as on budget and legislative proposals.

Bostic arrived at USC in 2001. There, he served as a professor in the School of Policy, Planning and Development. His work spans many fields, including home ownership, housing finance, neighborhood change and the role of institutions in shaping policy effectiveness. He was director of USC's master of real estate development degree program and was the founding director of the Casden Real Estate Economics Forecast.  He served the Lusk Center for Real Estate as the interim associate director from 2007 to 2009 and as the interim director from 2015 to 2016.

Bostic worked at the Federal Reserve Board of Governors from 1995 to 2001, serving as an economist and then a senior economist in the monetary and financial studies section, where his work on the Community Reinvestment Act earned him a special achievement award. While working at the Federal Reserve, he served as special assistant to HUD's assistant secretary of policy development and research in 1999, and also was a professional lecturer at American University in 1998.

Bostic was credited for his work on LGBT issues during his stint at HUD during the Obama administration. During that time, he led a study on LGBT discrimination in housing accommodation. Via Washington Examiner:

Previously, Bostic held a Senate-confirmed position in the Obama Department of Housing and Urban Development. After leaving that position in 2012, Bostic, who is openly gay, was credited by gay rights groups for his work on discrimination in housing markets and policies aimed at addressing the housing needs of gay and transgender people.

'The Federal Reserve Bank of Atlanta covers a region that includes Georgia, Alabama, Florida and parts of Louisiana, Mississippi and Tennessee.