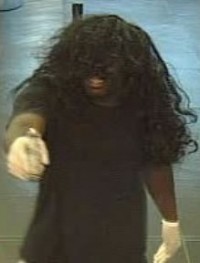 We’ve seen some messy drag queens in our day, but two Atlanta bank robbers armed with guns are putting a new spin on camp drag.

They are armed but certainly not fabulous. And with their wig selection, it’s likely even the Armorettes would kick them out of auditions.

Now the FBI is on their case — and not for the bad fake hair. One of them wears a short black wig, while the other sports shoulder–length locks.

The feds, not impressed with their costume drag either, say the pair robbed a Wachovia on Clairmont Road on July 27 and another in Norcross on Monday. Short wig robber hops the teller counter and grabs the cash, while his long wig accomplice stays put in the lobby. Their getaway ride is a silver Lexus.