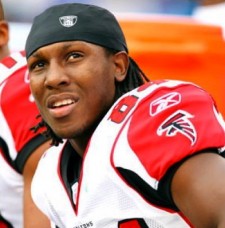 Do we need to teach a course on how to act on Twitter? For some public figures like Falcons receiver Roddy White with hundreds of followers, lesson one might be: People are watching. In the latest example of “I tweet like no one’s paying attention,” White decided not to directly answer a random fan question – whether he’d rather lead the league in receiving stats or win a Super Bowl – but to respond with his version of wit. Anti-gay public discourse, to be more exact:

“Would u rather be gay or straight come on u know that answer.”

Cyd Zeigler Jr. of Outsports broke the story Thursday with this observation: “Clearly White thinks that being gay is bad, otherwise he wouldn’t use the analogy to demonstrate such a stark 'easy-to-choose' contrast.” But White didn’t stop there. When challenged by followers – yes, Roddy, people are paying attention to what you say publicly -- he defended himself and got huffy about it.

“Freedom of speech. I don’t care how much money I make. I should be held to my own standards and not the standards of others opinion. #period”

Another follower responded: “Freedom of speech is protection from the govt for stupid shit you say, not from public opinion or your employer.” White’s response:

No, Roddy. The word gay isn’t the issue. It’s implying there’s a choice, and that everyone would choose to be straight if given an option. And is being "beingsoemotional" bad too? The twitter heat is on already; no word yet from the Falcons or the NFL. Lesson two, Tweeters (yes you, Mr. White): Think before you tweet, and don’t get defensive when you’re called out for dumb-assedness. You’re making it worse. Here are some screen captures in case he -- or his higher ups -- decide the comments should be deleted: