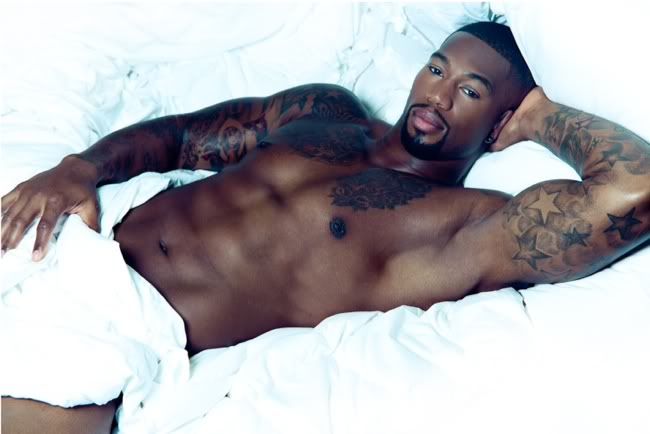 Hunky Atlanta Falcons defensive end Ray Edwards, his pierced nipples and his sexy package want you to know that he’s OK with the gays. Just don’t gawk too long at his biceps, abs or sexting pics he snaps with his phone. This is a professional football jock who’s comfortable with his body – take a gander at how comfortable in the photo gallery below – and comfortable enough with his masculinity that he’s not threatened by the gays. In fact, he tells Outsports that he’d “kick it” with a gay teammate like he does with his gay friends.

Atlanta Falcons defensive end Ray Edwards said he’s never had a gay teammate that he knew of, but it wouldn’t matter to him if he did. “If I did, I’d be very open to it,” Edwards said. “Everybody has what they want to do. As long as they don’t [hit on] me, I’m fine. We can hang out, have fun. We can kick it. I actually have a lot of friends who are gay. It’s fine with me. I don’t have a problem with it at all.”

That’s a refreshing approach for a player with the Falcons. What we usually get is Roddy White, who doesn’t respect the gays and their wadded panties, and Ovie Mughelli. He thinks calling him “gay” is an insult. So maybe we’ll see Edwards at Doggies on the Catwalk next year? Teammates Coy Wire and Brian Finneran have done it.