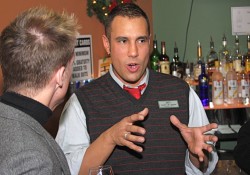 In a week that seemed set aside for holiday cocktails, mixers and celebrations, the Atlanta Executive Network weighed in with one of their own, too. It is that time of year.

Mixx in Midtown hosted the gay business group Dec. 10 for their last gathering of the year. The gathering also marked the last for Justin Ziegler (top photo) as board president. He’s served in that role for three years, but will remain with AEN as a staff member.

AEN gathers again Jan. 21 at Jungle for Star 94’s Hot Gay Joe — otherwise known as Joe Bechley, the partner of City Council member-elect Alex Wan — and his dish about everything hip and gay in Atlanta for the new year. Networking and cocktails are on tap, too. 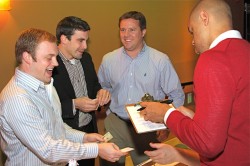 The AEN holiday party came during a week when other groups were toasting this time of year, including the Atlanta Gay & Lesbian Chamber of Commerce and Out & Equal, which doled out a handful of awards to people and non-profits.