The debate over the military’s “Don’t Ask, Don’t Tell” ban on openly gay servicemembers took an Atlanta turn on Saturday as more than 300 people helped raise about $30,000 for its repeal.

The fundraiser, at the Ansley Park home of gay attorney Randy New (top photo center) and Russell Tippins, attracted a diverse crowd as well as the board of Servicemembers Legal Defense Network, which was meeting in Atlanta to plot strategy for its continuing struggle against “Don’t Ask, Don’t Tell.” 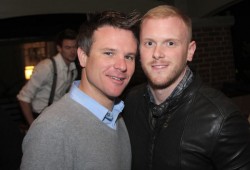 Attorney Jeff Cleghorn (top photo left), partners with New in Kitchens New Cleghorn, also helped organize the fundraiser and made a pitch to the crowd that resulted in the donation of several thousand dollars to help boost the evening’s total take to more than $30,000.

Also on hand was Aubrey Sarvis (top photo right), a South Carolina native and Army veteran who has been SLDN’s executive director since 2007.