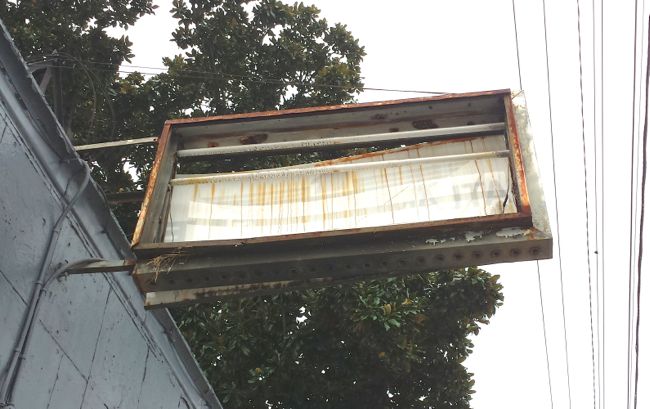 The non-Stoli drinking, smoke-free leather daddies of the Atlanta Eagle have a problem: The sign outside the gay bar is ratchet. It's the fault of Mother Nature and, thankfully, not Atlanta police. Or Russians. Either way, it's falling apart.

Old age wore down the sign, which was installed for some $2,000 about 15 years ago, according to co-owner Robby Kelley. But a bout of heavy rain and wind led to its partial collapse on Aug. 14. It's just one more kick in the pants for the bar on Ponce, which has slowly recovered from the police raid and rumors of its closing to crown its leather daddies, reinvigorate its event lineup and sweat through some packed Mash Attacks!

Kelley is investigating options to replace the sign, one side of which has fallen out while the other hangs precariously over the sidewalk. He says insurance won't cover the replacement and has asked for donations. An online effort by one of the bar's supporters to help raise funds has flopped. It's raised just $65 towards its $2,000 goal.

The Historical and Leather Bar, "Atlanta Eagle" needs your help. After 15 years of flying the bar sign, "The Eagle" has landed. We take great pride in the Eagle and what it has meant to so many of us over the years. No matter how small or large, your donation counts. Please help us purchase a new sign for the building. What was $2000 15 years ago now is much higher. Please help the EAGLE continue to fly strong and long in the community.

The fundraising effort has drawn critics, who say the for-profit business shouldn't get a helping hand from donors.

But Jeff Donaldson, who won Mr. Atlanta Eagle in 2012, argues that the bar's mission of supporting LGBT non-profits and social groups warrants payback from patrons.

While the Eagle is a business, the owners also give back to the community in a huge way. They are the only bar (that I know of) in the Atlanta area to allow clubs and groups to take over a bar once a month and raise money for their causes. We don't hesitate to ask the owners if they can allow us to stand at the door with buckets and raise money for the softball team to travel to a competition.....OR for the rugby team to travel to another country to compete.....OR for the bears to hold bear fest....and there are lots of others. These bar nights allow us to be able to run our clubs and without them I'm not sure where we would get the funds to help our community thrive. So, while a normal business might put up a new sign on their own the Eagle has proven that it's not a normal business. I'm not saying that we MUST raise funds to replace the sign, but I am saying that it would be VERY NICE to have the community it supports so much to give a little support back.

Now, if someone would please return the fire extinguisher they stole off the wall. 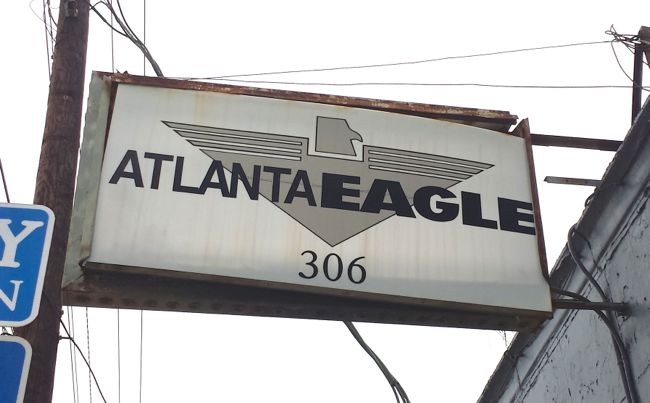