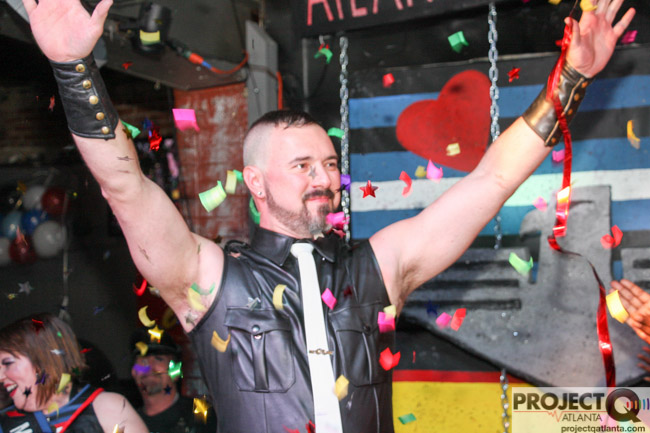 A weekend of celebration for Atlanta Leather Pride and the Atlanta Eagle’s 30th birthday reached its peak on Saturday as two new titleholders were crowned.

Jonathan Gattis (photo) won the title of Mr. Atlanta Eagle, while Dale Maddox was named Ms. Atlanta Eagle. The contests on Saturday were the highlight of the three-day Atlanta Leather Pride celebration, which also marked the 30th anniversary of its host bar Atlanta Eagle. After the contests, DJ Neon the GlowGoBear worked a packed bar for the Sweat Victory Party.

Gattis took the Mr. Atlanta Eagle crown from Rodney Braddock, who won in 2016. Braddock replaced 2015 winner Robbie Butler. Butler took the sash from J.P. Paquette, who replaced Tank Teachworth, who took over from Jeff Donaldson, who won after Wayne Turpin, who took the title from Chandler Bearden, who was crowned in 2010. Sir Alan Penrod won a revitalized Mr. Atlanta Eagle contest in 2009.

Maddox replaced Princess Leigha, who won Ms. Atlanta Eagle in 2016. She took the title from Khaz Brooks, who won in 2015, after Lizzy Fountain in 2013 and Jackie Hubschman in 2012.

The contests were emceed by Karen Ultra.