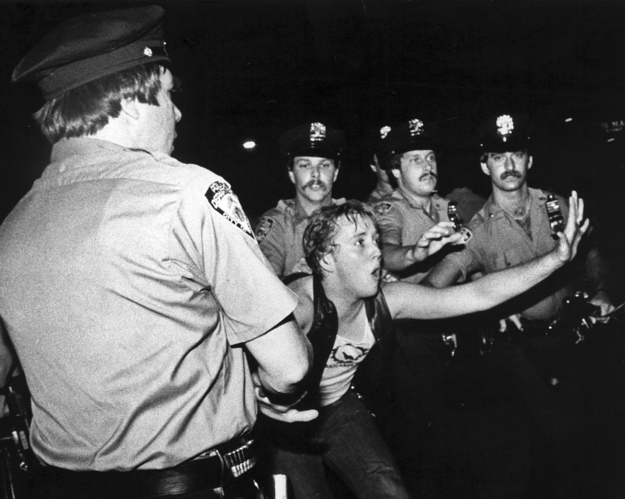 In 1969, everything about us was illegal. Congregating. Being served alcohol. Cross-dressing (“masquerading”). A simple touch could lead to your arrest and your demise.

If you were desperately looking for people like yourself, we were underground, but if you knew what to look for, you’d find us.

The Stonewall Inn was one of those places. It was a place for the outcasts, so everyone was there. The “drags,” the “queens,” the young ones, the ones with no homes, the trans people. Fags. Dykes. Bisexuals. People of color. Suits and ties.

It was seedy. It was dancing and joy and exploitative and dirty. It was a haven.

You’d go in, and up front were the gays. The drag queens were in the next room with the jukebox. The drinks were watered down. They let us dance there.

The Stonewall was a refuge from all of that seeking and sorting, from the toil of living the way we were forced to live. We saw ourselves and comforted ourselves in ways that people who are cast out from society do; aching to be left alone together, so we could not be so alone.

Sometimes the cops would raid the place. Maybe the Mafia didn’t pay up that week, or maybe the neighbors complained. However it happened, we’d done this before, and we knew what to expect.

There were always ID checks. Forget about it if your ID didn’t check out.

Women in masculine clothing could be arrested

When you were arrested, your name and address showed up in the paper the next day, and your life could be ruined.

It was hot on that June night in 1969. There were a lot of people out. They were looking for something to do. The music inside the Stonewall Inn was great. We danced, laughed. We remembered and mourned our beloved Judy.

We were free. We were home.

Suddenly, two bright-white lights flashed on the dance floor: the signal. The cops stormed in.

Dancers ripped themselves away from each other and quickly switched to opposite gender partners.

We threw our hands up on the bar so they could see we weren’t groping the person beside us.

They paraded us outside and lined us up against a wall.

We were sick of it.

This time, we resisted.

A crowd formed. The cops got flustered and rough. One hit a woman with his baton. Things happened quickly. We pushed the cops back into the bar. A fire started. Windows broke. More cops came. Madness ensued.

For six days we rioted, and the police retaliated, brutally. We stood up for ourselves. We took pride in who we were.

Today, we know this as Pride, and it’s a celebration. At Pride, we don’t have to work at hiding. We don’t have to worry about how we look or walk or talk, how we shake hands and embrace. We see ourselves and comfort each other. We laugh together. We are free. We are home. We take up space and we show the world that we make it a better place.

50 years after the Stonewall riots, beginning on June 29, 2019, Dykes on Bikes® Atlanta, in partnership with Femme Mafia Atlanta, My Sister’s Room and Atlanta Pride Committee, pay homage to the past, present and future of the LGBTQ movement that erupted that night during the Stonewall 50: Atlanta QueerStory Panel at My Sister's Room, 5 p.m.  That's followed by their celebratory slate of burleque, drag and more performances in the Stonewall 50: Big Rainbow Cabaret benefiting Positive Impact Health Centers, 9:30 p.m.

Pick up a new edition of Q each week at LGBTQ and queer-allied venues around town.