Angel McCoughtry on basketball, ice cream and her next big move 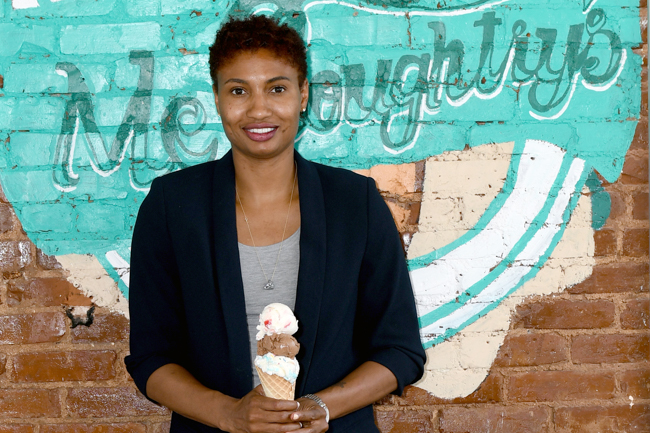 Atlanta Dream small forward Angel McCoughtry has had a wild ride over the last few years, including coming out, getting engaged, taking a season off, breaking off her engagement and tearing her ACL.

Now McCoughtry is busy rehabbing the knee, overseeing her ice cream shop in the Castleberry Hill neighborhood of Atlanta and starting an entertainment and production company as she prepares for her 10thseason in the WNBA. The Atlanta Dream home opener is May 24, so McCoughtry sat with us for a photo shoot on the following pages, as well as an interview about all the balls she juggles.

How does she balance it all?

“You just figure it out. It becomes routine,” McCoughtry told Q. “Because there was a point in time when I was just sitting in the hospital upset.”

“I’m glad to be busy again and doing a lot of the things I love,” she added.

It was like McCoughtry shot out of a cannon when she joined the Dream in 2009 after a stellar career at the University of Louisville. She won Rookie of the Year honors, then helped the Dream make it to the WNBA Finals the next season, where they lost to the Seattle Storm.

Since then, she’s racked up five WNBA All-Star honors, won the league scoring title twice and won Olympic gold medals with both the 2012 and 2016 Women’s National Teams.

In 2015, she gained a new legion of fans when she went public about her relationship with actress Brande Elise.

‘It’s not your job to judge anyone’

In 2015, the pro team McCoughtry played on in Turkey during the offseason threatened to cut her if she didn’t post a letter on social media saying she was not in a relationship with Elise. Instead, she took to Instagram and confirmed longstanding rumors by coming out and decrying anti-LGBTQ discrimination.

McCoughtry said she was ready for the backlash, but the positive feedback — especially from the LGBTQ community — stands out the most about that time.

She also singled out the people of Atlanta and the WNBA for supporting her during that time.

“I always just tell people, if something doesn’t have to do with you, don’t worry about it,” she said. “Don’t judge a person who’s gay, bisexual, whatever. It has nothing to do with you.”

“It’s not your job to judge anyone or to say someone’s going to hell because of who they love or this or that,” she added.

McCoughtry said she doesn’t like to label her own sexuality.

“Some people ask what I prefer,” she said. “I say good spirits.”

McCoughtry took the 2017 WNBA season off because she was “so burnt out.”

She opened McCoughtry’s Ice Cream on Peters Street in June of that year. It happened after two years researching the idea and finding the perfect spot.

“I have a big sweet tooth. I love ice cream. I was just like, I’m gonna try this and maybe this is a way to give back to the community,” she said.

“We let kids come in and learn about business and ask questions about how to run a business. We give a lot of free ice cream to businesses and organizations,” she added.

McCoughtry said she stays involved in the shop as much as she can depending on her schedule.

The WNBA star’s father makes a lot of the ice cream they sell, so visitors to McCoughtry’s shouldn’t be surprised to find him whipping up batches of the sweet treat in the back.

Elise was with her the day of the grand opening, but they would end the relationship later that year.

“So I opened up the ice cream shop, broke up with my fiancé. A lot of things happened,” she said. “It was really tough during that time for me. That’s why I’m thankful for that time off because it really helped with many things.”

McCoughtry returned to the court with the Dream in 2018, ready to continue a successful career. She was averaging 16.5 points a game and leading the team to the number one seed in the Eastern Conference when she blew out her knee at the end of the season.

She would miss the rest of the season and the playoffs.

“It’s like what the hell, what kind of year is this after coming off [the season off and the breakup]?” she said. “But the great thing about hurting myself is, it allowed me to give back.”

She called the injury “a blessing in disguise.” She volunteered with Atlanta LGBTQ homeless youth shelter Lost N Found.

“I talked to [the youth] and encouraged them that they can make it, that their life isn’t over,” McCoughtry said. “They were so intuitive and asked me a lot of questions. They really needed that.”

McCoughtry told Q that she is about 70 percent healed from the torn ACL.

“I’ve been working on it so hard,” she said. “In a couple months, I’ll be able to come back and play. I won’t be back until maybe July or August.”

In the meantime, she’s working on opening a second location of McCoughtry’s Ice Cream. The new one is planned for the University of Louisville campus, and a second Atlanta location is also under consideration.

“After the Louisiville location, we’re going to look at more locations in Atlanta and hopefully Baltimore, where I’m from,” she said. “Hopefully we franchise one day. But I’ve really been enjoying this.”

She also started an entertainment and production company.

“I have a writer that helps me out where I give him the ideas for my show and he helps me format it for a script,” she said.

The first project they’re eyeing? A TV show based on a pro basketball player who opens up an ice cream shop. Meanwhile, McCoughtry can’t wait to rejoin the Dream this summer.

“I’m looking forward to just being part of the sisterhood,” she said. “I’m one of the oldest on the team now. I definitely wanna win a championship this year. That would be such an amazing goal.”

The Atlanta Dream takes on the Dallas Wings in their 2019 home opener on May 24 at State Farm Arena.