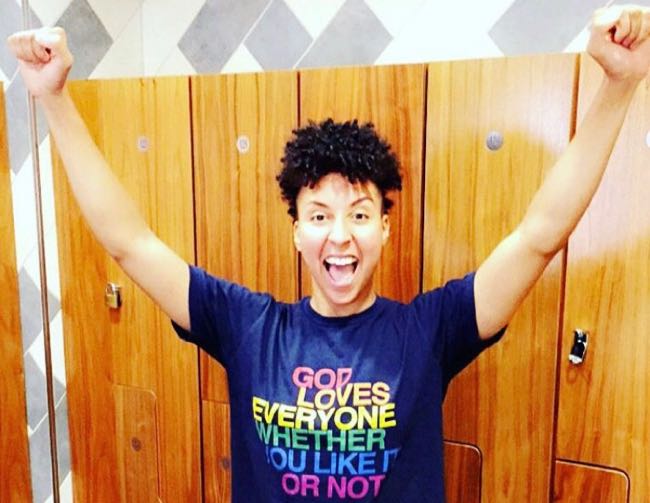 Layshia Clarendon – a guard for the Atlanta Dream and one of at least two gay players on the team's roster – came out swinging against legislation targeting transgender people.

Clarendon (photo) joined WNBA legend Brittney Griner in condemning Senate Bill 3, which is controversial legislation that would regulate bathroom use for transgender Texans. The professional athletes – in an opinion piece for NBC – said the legislation could subject transgender people to bullying and violence.

While we do not identify as transgender, we know what it feels like to be singled out for not fitting neatly into social norms. We have often been subjected to scrutiny and harassment for our gender expression. We play basketball, a sport that encourages women to be strong and competitive and challenges the cultural expectation of what it means to be woman in athletics. Because of our gender expression, we often struggle with navigating public spaces such as restrooms, restaurants and airport security, spaces where we have been called “sir” and “mister.” We empathize but cannot understand fully what it means to walk in the shoes of trans folks. As difficult as it is for us, we can only imagine how hard it must be for a transgender person.

Lawmakers who support this legislation say that it is to “protect women,” but who said we needed protection? As athletes, we are not worried about the imagined “threat” of a transgender person in our spaces –- we are worried about being accountable teammates, good people and competing at a high level every single day. We reject any attempt to use our names to push this bill. We know that our lives are enriched by the diversity that exists in sport, and we know that when we give people the freedom to be themselves unapologetically, everyone wins.

Griner and Clarendon said their opposition is a matter of supporting fairness and equality.

Texas is risking the safety and well-being of its transgender residents with this harmful legislation. Furthermore, as we saw in North Carolina, discrimination could cause the state to lose out on future opportunities for big-ticket events, which harms every person and every business in the state.

As athletes this bill falsely claims to protect, we want to state clearly: We believe trans people should unequivocally have the same rights as we do.

Texas lawmakers are wrapping up a special legislative session called in part to pass the anti-LGBT bill. But it likely has died – again.

Clarendon joined the Dream in 2016 after the franchise acquired the outspoken supporter of LGBT issues from the Indiana Fever. Griner, who plays for the Phoenix Mercury, is from Houston.