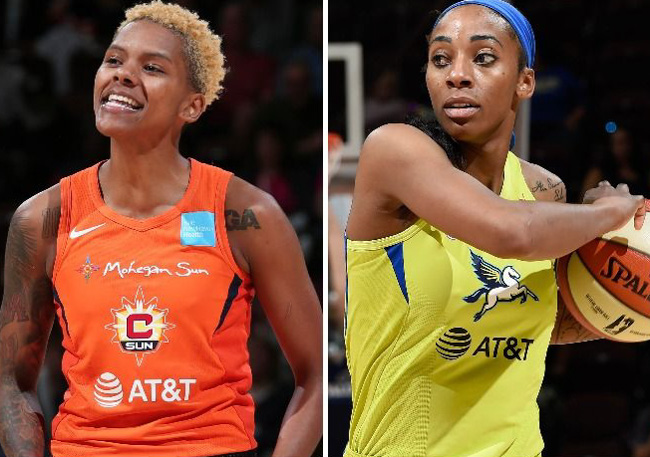 The Atlanta Dream made a flurry of moves including signing a lesbian point guard and a WNBA All-Star whose relationship with another player hit the headlines in 2015.

The Dream acquired Courtney Williams in a three-team trade with the Phoenix Mercury and the Connecticut Sun, according to a press release. Williams, a Folkston, Ga., native, has been public about being a lesbian and supporting LGBTQ rights, according to Women’s Hoops World.

Williams said on Instagram on Wednesday that leaving the Sun was “a hard pill to swallow.”

“The word loyalty is thrown around so loosely these days, and maybe I was raised differently, but genuine loyalty is shown through the good or the bad,” she wrote. “At the bare minimum I could have gotten a ‘thank you’ like every other player that decided not to rejoin the team, but like I said previously they continue to show me that business is business.”

“See you soon, Atlanta!” she added.

Williams’ signing comes just days after out WNBA All-Star Angel McCoughtry left the Dream for the Las Vegas Aces after 11 years with the team.

The Dream also signed free agent Glory Johnson on Feb. 13. Johnson was briefly married to WNBA star Brittney Griner in 2015. Both were arrested during a domestic dispute the month before their wedding.

They married anyway but Griner filed for an annulment a month later — a day after Johnson announced she was pregnant, according to Cosmopolitan.

Johnson told Cosmopolitan in 2015 that she is straight.

“Not a lot of people understand it. They wanted me to be a lesbian who converted from being straight,” she said. “It just doesn't work for me like that.”

Johnson, a Knoxville, Tenn., native, said on Instagram that she was excited to join the Dream.

“Not only is it the closest team to home, but Atlanta is exactly where I want to be,” she said. “I can’t wait to experience all the positive vibes and energy that you guys bring on a daily basis.”

Mannn Connecticut I love y’all so much! Y’all showed me so much love, and honestly helped me step into the player I am today. This process was definitely not an easy one for me, and it truly showed me that it’s all about business, and that loyalty and emotion has no place in these type of negotiations. This was a hard pill for me to swallow, and I’d be lying if I said I wasn’t hurt throughout this process. It’s hard to detach your feelings when you’ve given a program so much of you and have grown 4 years with the same group of ppl. I know that’s how it goes though, I learned that the hard way. Connecticut traded for me, and gave me an opportunity coming out of college and I’m forever grateful. Don’t get caught up in all the rumors that you may hear about why I left. I never intended nor wanted to leave CT and I hope the Connecticut fans and my teammates really understand that.. Thank you to the fans and my teammates for really accepting a kid like me and my different ways of doing things. Y’all are really something special and I love y’all forever! Sidenote: the word loyalty is thrown around so loosely these days, and maybe I was raised differently, but genuine loyalty is shown through the good or the bad. At the bare minimum I could have gotten a “thank you” like every other player that decided not to rejoin the team, but like I said previously they continue to show me that business is business. SEE YOU SOON ATLANTA!