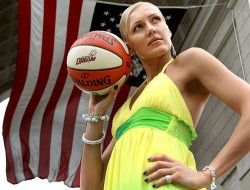 The Dream, which over the weekend clinched its second consecutive playoff berth in just the team’s third season, has reached out to lesbian sports fans in the metro area since before the team even had a name and logo. In early 2008, a WNBA executive spoke to the Atlanta Executive Network in what she billed as her first public discussion about being a lesbian in professional sports. Last year, nine LGBT groups benefited from the team’s Community Night.

On Sunday, the Dream hosts the Decatur Women’s Sports League in a benefit for the Atlanta Lesbian Health Initiative.

But for Leuchanka (photo), she wants to see more men’s butts in the seats of Philips Arena. It’s part of her effort to glam up the sport and its players and kick off her modeling career. No offense to the lesbians, of course.

Yelena Leuchanka of the WNBA’s Atlanta Dream is working to dispel the idea that female basketball players “all look like guys.” The 27-year-old has started modeling at fashion shows and wants players to be able to wear heels and dresses to team appearances. “Let’s be realistic—men would watch more women’s basketball if there were a lot of pretty girls,” she says.

Is she saying lesbians can’t be glam? Our informal surveys at Dream games show both butch dykes and lipstick lesbians, and it’s a solid bet that at least some of those fans enjoy “pretty girl” players and ones with a little, um, less polish.

“I’m proud of my height,” said Leuchanka on a break before heading to out-of-town games. “In the WNBA there are a lot of girls who are very stylish, and people don’t see it.”