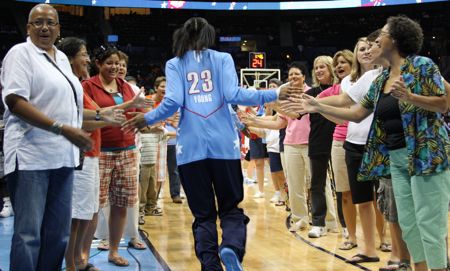 To put it in terms of a sports cliché, the Atlanta Gay & Lesbian Chamber of Commerce scored a slam-dunk on Sunday.

The gay chamber invited its members to a pre-game reception on Sunday at Philips Arena before the Atlanta Dream took on the New York Liberty. While the Dream lost (falling to 3-24), the gay chamber and the beneficiary of the event – the Atlanta Lesbian Health Initiative – won.

About 80 women took part in the event and helped raise nearly $500 for ALHI, according to Carla Corley, the chamber’s president. The group was initially looking to create a fun social outlet during the Dream game, but as discussions continued, the idea to create a benefit surfaced.

Some two-dozen of the attendees took part in halftime festivities by forming a human tunnel for Dream players (photo) as they took the court for the third quarter.

For a gallery of photos from the event, go here.