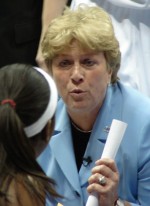 It’s been a good month for the Atlanta Dream.

The team capped it off by announcing that their second season opens June 6, one of 10 weekend home games and 17 overall home games slated for 2009. They open against Indiana. (And yes, Tennessee fans, Candace Parker returns to Philips Arena on Aug. 23.)

But let’s back up a bit. There’s even better news that came earlier this month: The Dream was awarded the WNBA’s No. 1 overall pick in the draft next year, beating out four other teams that failed to make the playoffs last season. (The Dream ended its first season with a league-worst 4-30 record.) The draft is set for April 9 following the NCAA Women’s Final Four.

Earlier this week, the team acquired the rights to Chamique Holdsclaw, a former WNBA player who’s now competing in Europe though she lives in Atlanta. Holdsclaw is considered one of the sports top female players. It doesn’t hurt that she played college ball at Tennessee, which enjoys a strong fan base in Atlanta.

“We are very excited to bring one of the best players in Tennessee women’s basketball history to our roster,” says Dream President and COO Bill Bolen. “The excitement this will bring to our fans is huge. We think it’s going to make a big impact on the Atlanta community and the entire southeast.”

Holdsclaw says she’s been considering returning to the WNBA.

“Coming back has been something that I have been thinking about for a while,” Holdsclaw says. “The only thing that was holding me back was my body and being healthy. I realized that if I had the chance I would like to play this summer.”

Marynell Meadors (photo), the Dream’s general manager and head coach, is also pleased about the personnel move, which can be solidified early next year.

“I’m just happy that Chamique is back in the WNBA,” Meadors says. “I just think she really misses the game. I am looking forward to having her. She elevates our team to another level.”