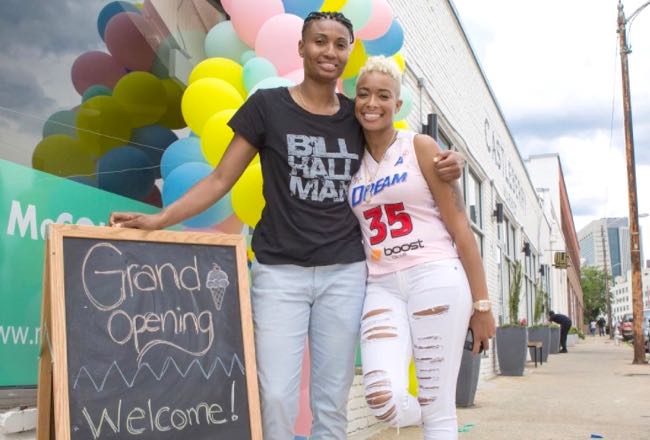 WNBA All-Star and Olympian Angel McCoughtry isn't delighting fans on the court – she's sitting this Atlanta Dream season out – but she's taking supporters to their happy place off the court. One scoop at a time.

Last week McCoughtry – one of at least two out players on the Dream roster – hosted the grand opening of her McCoughtry's Ice Cream on Peters Street in Castleberry Hill. It was a slam dunk. Via Fox 5:

“People are like, 'you're an Olympian, what do you eat, fruits and vegetables?'” said Angel McCoughtry, a two-time gold medalist. “I'm like, 'actually, sweets. Ice cream. I eat ice cream almost every day, don't tell anybody my secret.”

We all need that one person to encourage you to follow your dreams . That one person who allows you to always lean on them. Thank you @justbeamuse for being an amazing human being. Love you ❤️ and I can't wait to be apart your many ventures coming up!

The store includes a Champion Chip flavor – vanilla with chunks of chocolate chip cookies. Because of course it would. McCoughtry is an All-Star who helped the U.S. Olympic Team win gold last year – for the second time.

Come in today and try our champion chip İcecream! (Vanilla based icecream with chunks of chocolate chip cookies) �� @officialbrandonblue

It can't hurt that McCoughtry's Ice Cream is neighbors with Old Lady Gang, the Southern cuisine restaurant opened earlier this year by Kandi Burruss. The singer, song writer and “The Real Housewives of Atlanta” cast member is a staunch LGBT ally.

Everyone who knows me, Knows how much I love this women right here. I look forward to seeing her smile which can brighten anyone's day����! It's an honor to be next to Old lady gang! Thanks for being my inspiration @kandi .

As for when McCoughtry will once again be wowing fans on the court? Don't expect her hiatus from the Dream to last too long. Via Fox 5:

“I just needed that recharge button,” said McCoughtry. “I'm not retired, I have many more years left. Just need a little rest, need to enjoy the summer one time.”