When you don't get picked as a Pride entertainer, you can respond with grace and try again next year. Or you can act like this Atlanta queen, who screams, stalks, name calls and issues a three-part epic rant.

Mercedes Iman Starr launched her verbal assault on Sept. 1 with Fuck u Samantha fox, a 1-minute, 38-second tirade against South Georgia Pride, drag queen Samantha Fox and others. Organizers of the festival, set for Sept. 21 in Valdosta, didn't include Starr in the entertainment lineup. Starr is just a little bitter and what do bitter queens do? They rant about it on Facebook.

"Samantha Fox of Valdosta, Ga.: You couldn't book me, the diva, to come entertain y'all for Valdosta Gay Pride? All I gotta say is fuck you, fuck your mama, fuck your sister, fuck your grandma, fuck your cousin, fuck your daddy, fuck whatever dreams you may have. In other words, fuck you," Starr rants in the video.

Then there's a lot of bitch this, white stud that, sucking dick this, 'ho that. You know, the stuff of epic rants.

Fox is scheduled to perform in Pride's drag show as well as an after party at Glo Ultra Lounge, also in Valdosta. So Starr continues her assault with Can I get a booking valdosta GA. I'm giving u Samantha fox. It's a nearly 1-minute takedown of Fox and other Pride performers.

And the Sept. 5 finale, Stop sucking dick, is a rambling mess of a rant that talks about flavored condoms, blocked Facebook posts, Noxzema and accusations that performers performed sexual acts to perform at Pride.

'Y'all try to come for me and you are ratchet," Starr says.

But this drag queen's assault on South Georgia Pride isn't limited to videos posted on Facebook, the highlights of which you can watch above. She also stalked the group's event invitations with posts including this. 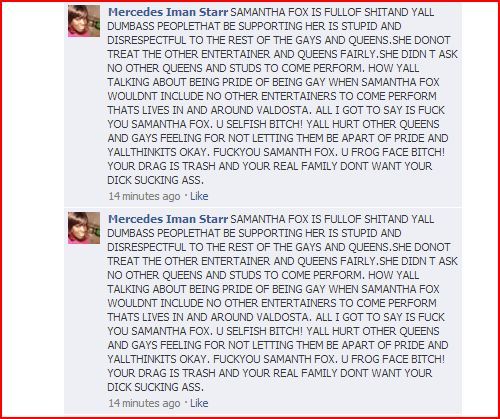 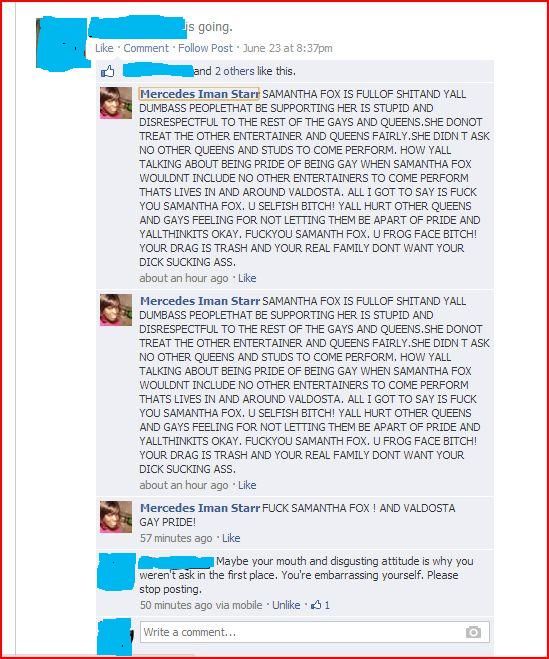 The assault became so constant that it prompted Pride organizers to respond on Sunday.

On our South Georgia Pride Festival 2013 event page, a certain individual is making vulgar comments. We respect Freedom of Speech, but when that speech is vulgar, nasty, and hateful towards other people and towards our organization, We will not tolerate it. We will also not tolerate any form of bullying.
There have been many false statements made in regards to SGP and our Drag performers.

South Georgia Pride is an organization that is the host for the annual gay pride festival, but we do more than the festival. We have monthly meetings & gatherings. Our festival is more than Drag Queens and Kings that perform for the one hour drag show. We will have guest speakers that will be speaking on very important topics for the LGBT community. Our festival is a day for straight allies and the LGBT community to come together to celebrate diversity. We have Churches who are vendors who are there to let our community know that they love and support us. We have local businesses that are there to show their support. And many LGBT non profit organizations (PFLAG, Georgia Equality, etc)

Why someone in the LGBT community would work so hard to try to bring a rift in it does not make sense to me.

This person and her friends that continue to share her videos and posts have never contacted me to perform at the South Georgia Pride Festival.

And many of our performers (singers, dancers, Drag Queens and Kings) are performing for FREE or for a greatly reduced rate. They are donating their time and talent.
SGP is a 501c3 Non Profit and we operate on Donations.

Fox fired back, too. 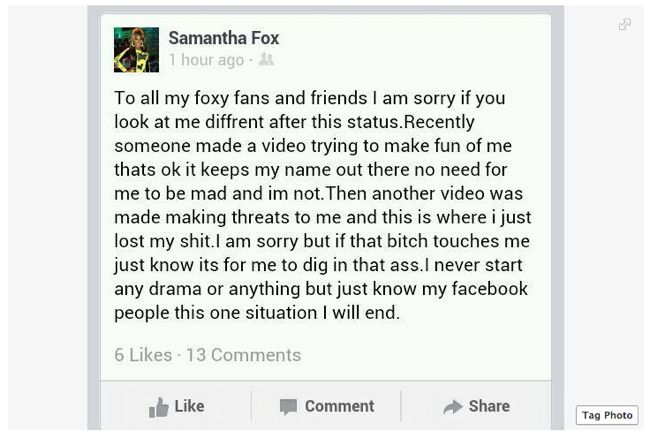 So add Mercedes Iman Starr to the growing list of queens ranting over "smart ass fucktards," "white lesbian bitches" and their cancer friends, shitty patrons and getting fired, which might happen to Starr if anyone is ever dumb enough to hire her.