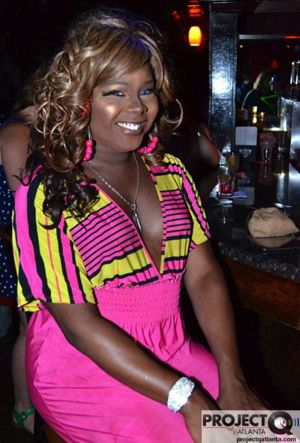 Drag queens, and even gay Atlanta bar owners, do unleash when crossed. But sometimes, on occasion, their epic rants turn into teachable moments. Atlanta queen Dymond Onasis tries that when she unloads on a disrespectful lesbian.

On Wednesday afternoon, she got warmed up with a Facebook post about a straight stoner who got into her business a little more than she wanted.

i am about to go the fuck off. seriously. my business is mine don't need random strangers telling me shit. I am going to say this once if you blessed enough for me to acknowledge you then feel lucky!! my circle is small and gets smaller everyday. ‪#‎queenstandsalone‬

About three hours later, though, she really ranted. Onasis teed off on a lesbian neighbor who apparently missed the lesson about not talking shit about someone else in the LGBT family. By then, Onasis had enough.

POSITIVE POSITIVE POSITIVE...as a role model its very important for me to stay upbeat and positive to this younger disrespectful generation!! The way these youngins talk to each other and what they tolerate is beyond me!! Children people have marched and died for you to be the little smart ass fucktard you are!! I am at my witts in, I want to take a belt and just line all of you up and go to town.

OK, not so positive. But points for the reference to the Civil Rights movement. A rant with a little historical perspective. Savannah Leigh didn't do that.

Then Onasis transitions to some specifics about what happened.

Today a young 19 year old lesbian that lives next door to me with a whole bunch of niggas allowed one to be disrespectful and think the shit is funny?? Now as a role model an advocate for change I have stopped various name calling that was going in her direction. Being all Hilary Duff, making the big speech, being the party buzzkill being a MOM ...however I did the appropriate thing as a member of the LGBTQ community!! SO when the tables are turned why are you laughing with the enemy?? At the end of the day obviously they will be right there on the sidelines of the parade with their signs....mentally if not physically!!

What is it with lesbians being the subject of rants? Baton Bob took aim at one recently. And failed.

But now for the chorus. Imagine some club anthem playing in the background as you digest Onasis' close.

Children i say this to you STAND UP FOR SOMETHING!! ITS CALLED PRIDE FOR A REASON!! Its not just some all day long drinking fest with a cute parade, boys and tiaras.....it is about Human Rights, being VALUED as an INDIVIDUAL, & BEING CONSIDERED EQUAL!!

If we come together we have the POWER to CHANGE THE WORLD, all we need is LOVE!!

Come on be LUMINARY!!

Remember, do not cross a drag queen.