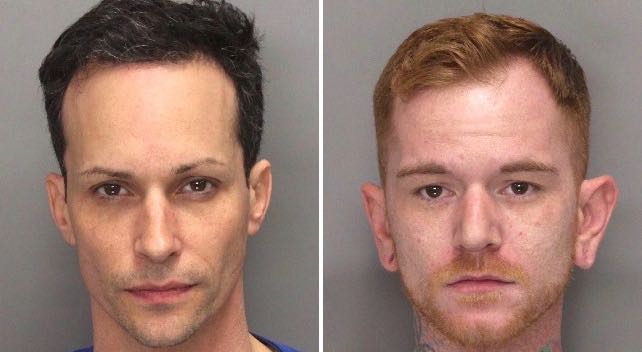 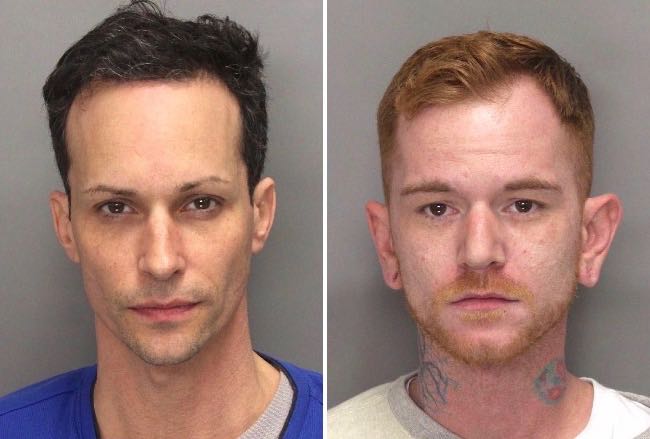 A popular Atlanta drag performer was arrested on drug possession charges and a gay nightlife promoter on drug trafficking charges when police stopped their car for a malfunctioning tag light.

Brian Christopher Pryor (photo left) – who performs as Nicole Paige Brooks – and William Corbett Harkins (photo right) were arrested in the early morning hours of Dec. 12. A Marietta police officer pulled over a green Honda Accord being driven by Pryor about 2:30 a.m. on Barrett Parkway after noticing the tag lights weren't working.

When Officer J.A. Foster approached the car, the officer noticed “an overwhelming odor of green marijuana emitting from inside of the vehicle,” according to an incident report from the Marietta Police Department.

At that point, Foster asked Pryor and Harkins to step out of the vehicle. Harkins refused to allow the officer to search him, while Pryor pulled a small plastic bag of marijuana from his jacket pocket, according to the incident report. Pryor then consented to being searched by the officer.

“Due to the overwhelming odor of marijuana inside the vehicle I explained to both occupants I would be conducting a search,” Foster wrote in the incident report.

What the officer allegedly found inside was a treasure trove of drugs, pills, cash and drug paraphernalia.

Foster found Xanax and Oxycodone pills inside a metal capsule attached to Harkins' key ring, which prompted the officer to arrest him, according to the incident report. Harkins objected and said he had a prescription for the drugs on his phone.

As the officer searched Harkins and a vest he was wearing, he found a black wallet that allegedly contained 44 small blue and white plastic bags each containing cocaine and a plastic container with suspected synthetic marijuana inside. A green wallet attached to Harkins' jeans contained seven small plastic bags with marijuana inside, according to the incident report.

When Foster searched inside the vehicle, a prescription pill bottle with Harkins' name on it contained three different types of pills – amphetamines, hydrocodone and an unidentified black capsule. A backpack that Harkins admitted belonged to him had a plastic bag with marijuana and $554 in cash wrapped in a rubber band. An additional $40 was found in the front passenger seat where Harkins had been sitting.

Harkins also had seven small plastic bags containing cocaine, three bags with marijuana, and $53 stuffed in his vest jacket, according to police.

“Due to the presence of drugs and the manner in which they were stored and transported I determined the money was related. All money determined to be in control of Harkins was seized,” Foster wrote in the incident report.

Harkins was later released from jail on $30,000 bond. He faces five felony charges – drug trafficking, possession or sale of marijuana, and three charges of possession of a controlled substance.

Inside Pryor's beaded blue wallet, the officer found a small blue plastic bag – similar to the bags Harkins had – with cocaine inside. Police said Pryor had about two grams of marijuana and less than one gram of cocaine when he was arrested.

Pryor was later released on $4,000 bond and faces a felony charge of cocaine possession and two misdemeanors – possession of marijuana and a tag light violation.

On Jan. 12, Cobb prosecutors filed a complaint in Superior Court to condemn the $647 seized during the December arrest. The court documents said the money “was found in close proximity to marijuana, cocaine and pills” and was the proceeds from selling the drugs

A hearing in that civil case is scheduled for March 27.

Pryor is a longtime drag performer who was one of the first Atlanta queens to compete on “RuPaul's Drag Race.” Pryor emcees and performs at several gay Atlanta bars and regularly takes part in fundraisers for local non-profits and charity groups. Friends and fellow performers hosted a roast in 2015 to celebrate Pryor's 20 years of memorable drag.

Pryor declined to discuss the incident when contacted by Project Q Atlanta.

“There are more important things to talk about than me being stopped in a traffic stop in Marietta,” Pryor said.

Harkins called it “a terrible situation” and declined further comment.

UPDATE | The post was revised to remove a reference to a place of employment for Harkins. The owner of the business said Harkins has not worked there for nearly two years.