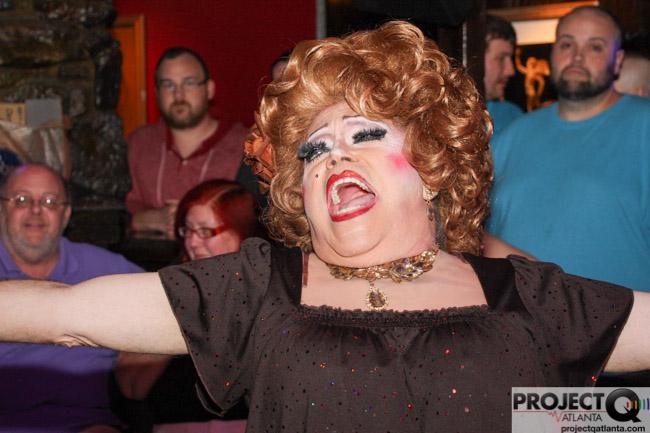 Friends and fans across LGBTQ Atlanta are mourning the death of Sharon Needles, who died Saturday after a long battle with cancer.

Needles (photo), whose legal name was Edward Smith, died in a hospice care facility in Covington, according to her partner David Jones.

Needles was a longtime member of camp drag troupe the Armorettes. She also performed with Ruby Redd’s Birdcage Bingo, according to cast member Anne Drogyny.

“Sharon spent over 40 years donating her time and talent to spreading awareness and raising millions of dollars for those living with HIV/AIDS,” Drogyny told Project Q Atlanta.

“She always had a smile and was so kind,” Jealouse said. “Sharon supported so many performers. Sharon’s legacy of charity and always giving back will live on.”

Tyler Casper met Needles at a club in Monroe, Ga., in 2015. It was Casper’s first time performing in drag publicly.

“She had seen me outside the building hyperventilating and feeling sick to my stomach before my number and she asked me my name,” Casper said. “She said, ‘Well darling, I see something special in you that isn't painted on a beautiful face, but what's in your heart. That's passion and drive. Don't ever lose it, have fun and just twirl.’”

Casper, who performs under the name Freya Diva, called Needles his “drag aunt.”

“Sharon never steered you away from being something you're not,” he said. “Whatever you are meant to be is meant to be, and she encouraged that. I know that she was in life and is still to this day an angel.”

Details of a memorial service are still being worked out, according to Jones.

Here’s Needles performing at Ruby Redd’s Birdcage Bingo show at Midtown Moon in November. The show was a benefit for Pets Are Loving Support.

UPDATE | Atlanta drag queen Roxy Redd followed up after this story was published to salute Needles' work with the Armorettes and Ruby Redd's Birdcage Bingo.
“She has helped to raise so much money for charities,” she said.
Redd said Needles “truly was amazing.”
“She was always smiling and so eager to lend an ear, shoulder or kind words of encouragement,” she said. “She really was an all-around great person. She put up a great fight with her illness. She's truly gonna be missed, but never forgotten.”