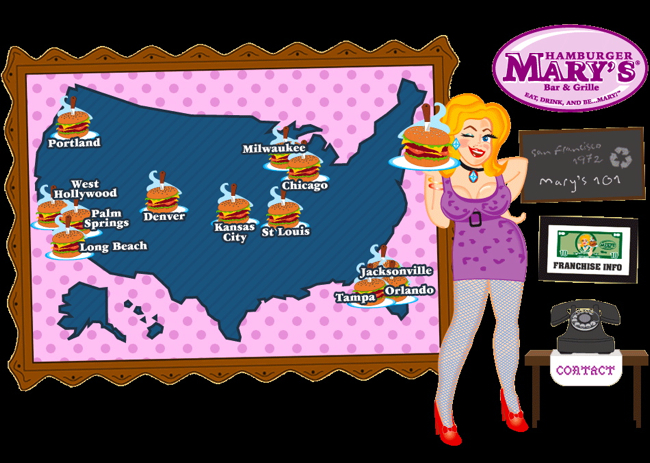 It won’t be in the space where short-lived 5 Napkin Burger sat for exactly a year at the corner of Gay & Lesbian in Midtown, but the national gay-owned restaurant chain Hamburger Mary’s wants an Atlanta location. If location is the key ingredient to restaurant success, the Piedmont Avenue and 10th Street spot wasn’t the problem at 5 Napkin Burger, to be sure. Mixed reviews put the blame mostly on owners not catering enough to the uber-gay locale (though these photos and and these suggest they at least sometimes gave it a pretty gay go). Others say gourmet burgers at even more gourmet prices were the real downfall when 5 Napkin closed for good last month. A failed health inspection didn't help. But wouldn’t the gay chain Hamburger Mary’s – with the motto “Eat, drink and be… Mary!” and a dozen thriving locations catering to a gay clientele -- be perfect? Chances are, you touristy gays have eaten some yummy, affordable Mary’s goodness on a visit to gayborhoods in Tampa, Orlando, West Hollywood, Chicago or other destinations. And dreams of having a Mary’s here aren’t completely unfounded. In fact, an Atlanta group bid to lease the beloved Nickiemoto’s-cum-5 Napkin space to do just that, but it’s not going to happen, at least at that location, the Atlanta-born owner tells What Now Atanta, a retail, food and real estate blog run by gay Atlanta’s own Caleb Spivak.

“As an Atlanta-native, I have been hoping that someone would open a Hamburger Mary’s [in Atlanta],” Ashely Wright, owner of the Hamburger Mary’s franchise, told What Now Atlanta in an email Saturday. “Over the years, we’ve had discussions with several potential franchisees, but so far nothing has panned out.” An Atlanta group was interested in replacing Five Napkin Burger with a franchised location of Hamburger Mary’s, according to Wright. However, the space is apparently being leased to someone else, he said.

No word yet on who the new Five Napkin replacement will be, but Hamburger Mary’s wants a piece of the gay action in Atlanta and is pursuing other options, the owner added. “I think an Atlanta Mary’s would be an instant hit,” Wright told the blog. “So we will see what happens." Keep thinking burgers. Maybe one day soon a Mary's employee will take your order for what you crave. Want guys with that?