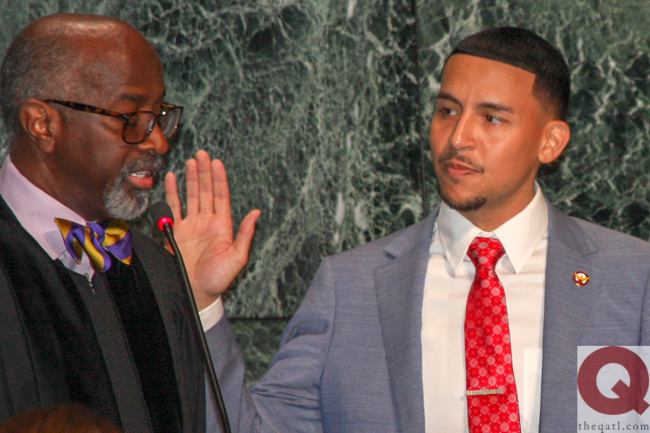 Entrepreneur Antonio Brown took the oath of office on Monday, becoming the Atlanta City Council’s first-ever black bisexual member and the only open LGBTQ person on the council.

“I got into this race because I really believe that I can make a difference,” Brown said. “But I also believe that my life could be a reflection of the possibilities of someone else’s life — another constituent in whatever district they should live in to believe and have hope again in our city government, and to believe that we can truly make change no matter where we come from in our lives.”

Brown beat former Atlanta Public Schools board member Byron Amos in the April 16 runoff election to fill the vacant District 3 seat of Ivory Lee Young Jr., who died in November. Young’s widow, Shalise Steele-Young, was one of nine candidates who ran for the seat. Steele-Young, who finished fourth in the first round of voting in March, said a prayer for Brown during Monday’s ceremony.

Brown returns LGBTQ representation to the city council, which has had none since 2017 when Alex Wan gave up his District 6 seat to run for council president. Brown was assigned to three committees – Community Development/Human Services, Public Safety & Legal Administration, and Committee on Council.

On Monday Brown referred to a candidacy challenge by Greg Clay, who finished third in the March election. A judge ruled against Clay and allowed Brown to stay on the ballot.

“They threw everything but the kitchen sink at us, and we still rose,” he said.

“I want to build with you,” he said. “I believe in you. You were the first person I ever voted for in my life.”

Brown also called on Bottoms and Atlanta City Council President Felicia Moore — who served on the city council together and have sometimes been at odds in their new positions — to work with each other.

“You need to have conversations,” he said. “I don’t care what happened in the last administration — this is a new day.”

“I was in this chamber for eight years, and what I can tell you is that at times it is the most fulfilling, but also sometimes the most frustrating experience that you can have,” she said.

“You are now the designated leader of [District 3], and all the hopes and dreams that are still there,” she added.