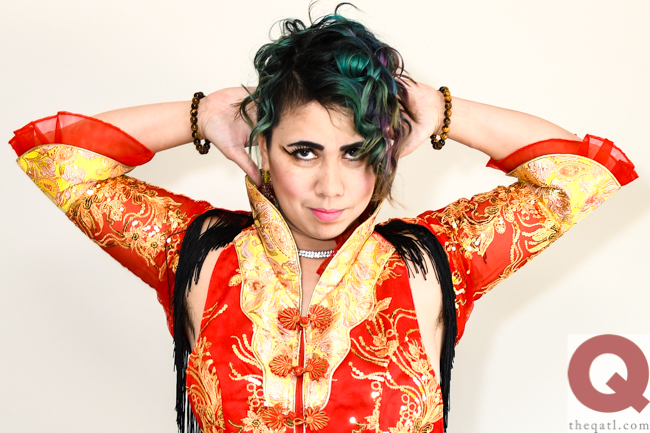 The burlesque dancer now known as Flux Inqueerior came to Atlanta from Wilmington, N.C., in 2013. Since then, they’ve performed at clubs across the city “incorporating queerness as an act of long overdue self-love,” as they told Q in a recent chat.

They opened up about the Flux Inqueerior their origin story, the importance of living their truth in performances, and how they wind down when not in Flux mode.

How did your burlesque journey begin?

Back in Wilmington, I was immersed in the regional Burning Man scene, which often intersects with a lot of performance art, including burlesque.

I first encountered burlesque up close when I was bartending one of the burlesque shows in the area. I have always been drawn to dance, but I became enchanted with the striptease and sexual freedom entwining with the choreography, fire arts and the vaudevillian comedy.

What were your inspirations in creating Flux Inqueerior? 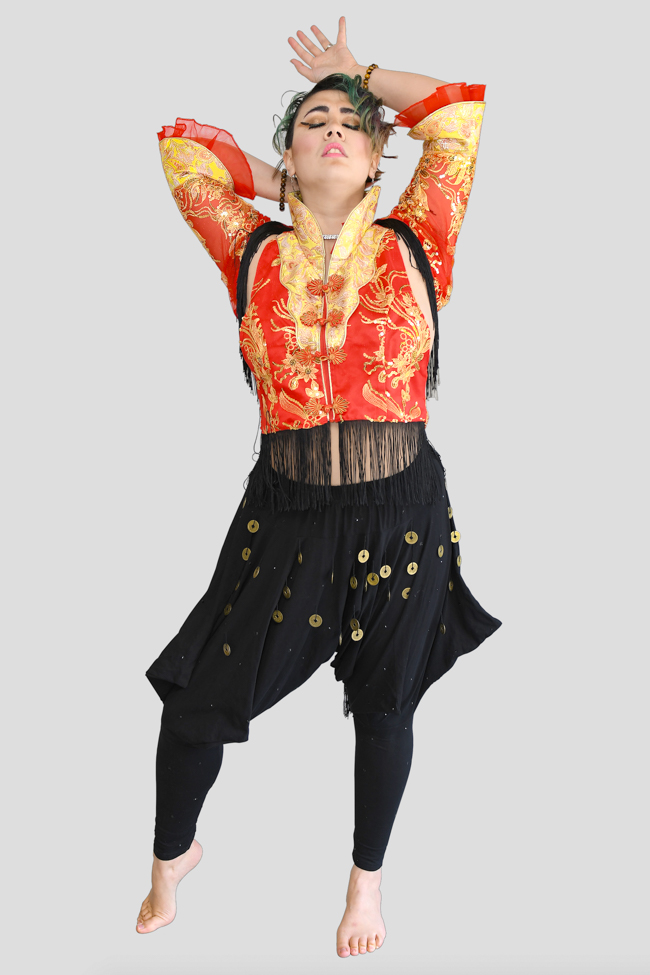 Flux Inqueerior was born in Atlanta. I had been performing under another name when I first started, and I brought it over when I first moved to Atlanta. After several years of living in Atlanta, I had gone through a lot of major life changes and started discovering more about my identity and also what I really wanted to bring to the stage with my art.

Flux is still constantly evolving, but what brought Flux to fruition is liberation in my sexual orientation, gender identity, biracial background, activist roots, and my long-lasting love of music, especially punk music. The name Flux Inqueerior is a tribute to Lux Interior, singer of The Cramps.

What can people expect at a Flux performance?

Before I became a dancer and burlesque performer, my medium was writing. I am still a storyteller, but now rather than through pen and paper, it's through rhinestones and choreography.

Regardless of whether the performance leans more toward neo-burlesque versus classical burlesque, or maybe comedic raunchiness versus introspective sensuality, I always aim to have some narrative behind the stripping and dancing.

What role does queerness play in your performances?

It took me some time to really embrace, and find the right words and descriptors for, my identity — for my Asian roots mixed in with my white/passing privilege, my queerness, my gender-fluid and non-binary identity. I incorporate queerness as an act of long overdue self-love, and I want others that might be questioning or struggling through society's pressured heteronormativity and gender binaries to be encouraged to explore themselves and find self-love.

Being AFAB and in relationships with cis men, I have seen and experienced queer/ bi/ pan/ trans/ NB erasure and mistreatment, including in the queer and burlesque communities. Through my queerness and my art, I want to amplify queer, POC, and other marginalized voices, while also defying stereotypes of queer and gender-nonconforming folx, and harmful behaviors such as prejudice, erasure and gatekeeping.

What is Tassselcade and how did it come about?

Tasselcade is a burlesque tribute to professional wrestling. It was the brainchild of local performer and the Unicorn of Burlesque, Coco Rosè, and both me and my husband, Teddy B. Picnick, co-produced alongside with Coco. I became more of a wrestling fan thanks to Teddy, who is like Coco, a diehard wrestling fan that grew up on it. It was my first time dipping my toes into producing, and I really couldn't think of better people to experience that with and learn from.

When we first did Tasselcade last year, we had a fantastic stunt-fight scene opener, and amazing burlesque performances that were based on wrestlers like Sting, Shinsuke Nakamura, Goldust, Ember Moon, Becky Lynch, Daniel Bryan and Miss Elizabeth. It's still in the very early stages of development, but we plan on Tasselcade returning with more and new exciting acts.

What do you do when you’re not in Flux Inqueerior mode?

Since Flux is such a proclamation of my identity, I think I am always in Flux Inqueerior mode to some extent, even when I am not performing, producing or practicing. One of my performer taglines is “The Inquiring Introflirt,” because I am an introverted person that loves to (probably awkwardly) flirt, but I am also totally that person that might be hard to read because some people see resting bitch face and think I don't like them when I first meet them.

I am a pretty quiet and laidback human that still loves company (though I socially navigate better in smaller groups), has their own business, and likes to read a lot, go to my dance classes, do hippie things like garden and dabble in herbalism, have cooking parties and travel whenever I can.

Flux Inqueerior’s next local show is Syrens of the South's Tease Tuesday on March 10 at Red Light Café. Find them on Instagram  and on Facebook.

A version of this interview originally appeared in Q magazine. Check out all of our Community Q&As, and read the latest issue online here: