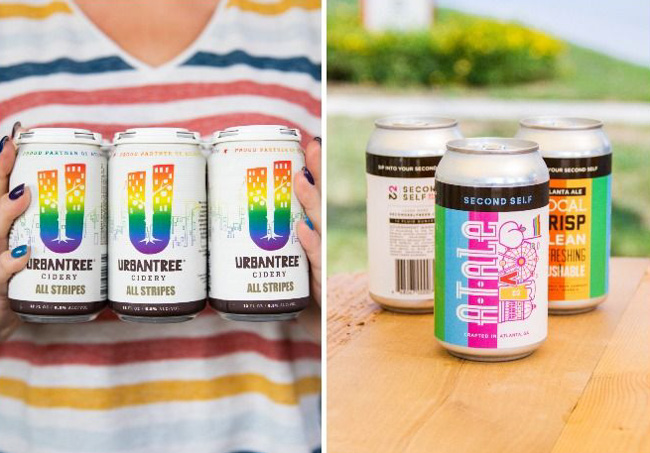 A local brewery and cidery are getting into the Pride spirit by releasing limited-edition cans and donating to LGBTQ organizations.

Urban Tree Cidery will host a Pride kickoff party this Friday through Sunday at its West Midtown tasting room. A portion of the event proceeds will go to All Stripes, the LGBTQ fan group for MLS Cup champion Atlanta United. The cidery will also debut its All Stripes Cider.

The Urban Tree Pride kickoff party will feature drink specials and raffles plus a Pride-themed edition of the cidery’s Bottle & Board party, which is held every Friday. Queer comedian Ian Aber will host a comedy night showcase on Saturday.

Urban Tree is a major ally of LGBTQ Atlanta, according to Steph Mold, All Stripes’ sponsorship chair.

“All Stripes were looking for an alcohol sponsor for our tailgates and members and they came in full force and have supported us unconditionally and at no cost to us,” she told Project Q Atlanta. “We really value the space they have provided, the product they've donated and the warm welcome we receive every time from everybody at Urban Tree.”

Urban Tree is the official cider sponsor for Atlanta United 2, so the partnership with All Stripes is a mix of two passions, according to co-owner Jackie Annise.

“We have members of our team here that are members of the LGBTQ community,” she told project Q. “The message from [Pride] weekend about inclusivity and love is what we are and who we are as a company.”

Second Self Beer Company is also celebrating Pride with limited-edition Pride cans for the third year in a row. The can won Atlanta Magazine’s “Best Beer for a Cause” award in 2018. One dollar of every Pride six-pack sold at the brewery will be donated to Lost-n-Found Youth.

“Love and respect are our guiding principles at Second Self, and it will always be a priority of ours to show support for the LGBTQ+ community,” said Second Self's Co-Founder and Beer Architect Jason Santamaria in a press release. “We’re thrilled to be releasing this can design for the third year.”

Second Self’s Pride cans are available throughout October at their Westside tasting room and in shops, bars and restaurants throughout Georgia and South Carolina.