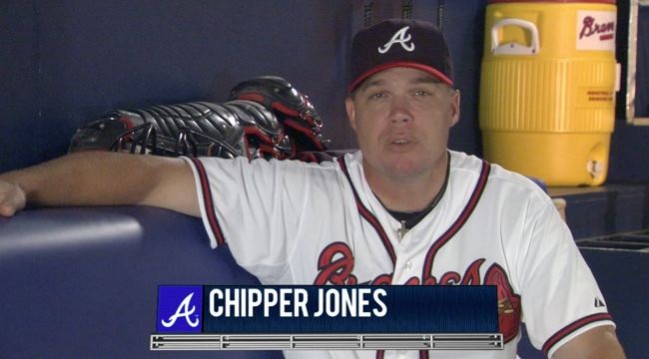 The Atlanta Braves, stung earlier this year by the anti-gay rants of their pitching coach, unveiled a gay-specific anti-bullying public service announcement for use in public schools across metro Atlanta.

The videos – with 30- and 60-second versions in both English and Spanish – include Braves players Chipper Jones (photo from video), Tim Hudson, Brian McCann and Jason Heyward talking directly to bullying victims, others who witness the acts and the bullies who commit them. Martin Prado is featured in the Spanish-language version.

“The Braves believe that everyone deserves acceptance, compassion and tolerance regardless of race, sexual orientation, ethnicity or religious belief,” Jones says in opening the English language spot.

The Braves partnered with the Anti Defamation League to distribute the videos to schools involved in the group’s No Place for Hate Campaign. The videos point viewers to the ADL’s bullying resource center. The public service announcements weren’t publicly available Thursday, though a Braves spokesperson said the public would soon be able to view them on the team’s website.

“It seems that bullying has gone to a whole new level in the last several years and the consequences are staggering,” Atlanta Braves President John Schuerholz says in a press release announcing the videos. “We know that kids listen to their favorite athletes and we had many of our players who wanted to be a part of this. Hopefully, hearing from someone they admire will result in them seeking the help they need.”

The videos, along with a gay Out in the Stands night at a Braves game in September, came after Schuerholz and other team executives met with officials from Georgia Equality, Georgia Safe Schools Coalition and PFLAG in May to discuss the continuing fallout over Roger McDowell’s anti-gay rants and sexually-suggestive gestures with a bat.

Jeff Graham, Georgia Equality’s executive director, urged Schuerholz to have the team become involved in anti-bullying efforts and help make schools safer for LGBT students. Earlier, the group had called McDowell a “bully”; the pitching coach apologized, was benched for two weeks, fined an undisclosed amount and ordered to undergo sensitivity training. He does not appear in the new anti-bullying videos.