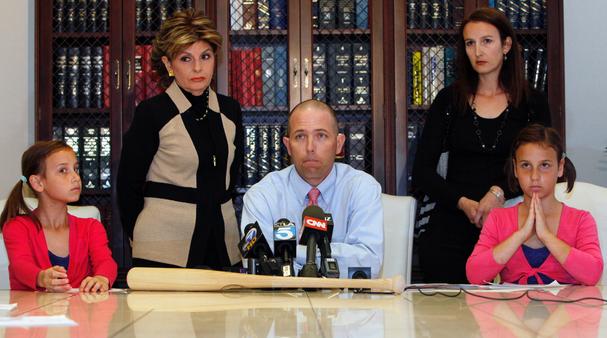 UPDATE: Braves management expected to meet with McDowell on Thursday, according to AJC Braves beat writer David O’Brien. No decision has been made about punishment.

Atlanta Braves pitching coach Roger McDowell has apologized for tossing gay slurs before a game on Saturday, but the incident is under scrutiny from gay activists and Major League Baseball for McDowell’s threats that nearly turned violent.

On Wednesday, a California family who witnessed McDowell (second photo) shout the anti-gay slurs and then was apparently threatened by him, held a press conference with high-powered attorney Gloria Allred to detail the incident and demand an apology. Allred also asked for McDowell to be fined and suspended. 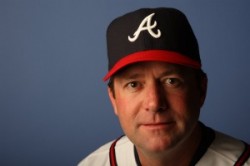 Later that day, McDowell issued an apology for the incident, which took place Saturday at San Francisco’s AT&T Park.

“I am deeply sorry that I responded to the heckling fans in San Francisco on Saturday. I apologize to everyone for my actions,” McDowell said in a press release.

The Braves, stung for their delay in taking action against pitcher John Rocker for his anti-gay outburst in 1999, swiftly issued their own statement about McDowell’s incident.

“We were made aware of an incident in San Francisco this past Saturday,” the team said Wednesday. “We are concerned by these allegations and the behavior described by a witness today. This in no way represents the Braves organization and the conduct we expect of our employees. We will withhold further comments until we finish gathering information.”

But the issue is hardly over for McDowell, both for its seriousness and for its timing. The outburst came before the game, not in the heat of competition and apparently neared violence. It also happened just days after the NBA fined Los Angeles Lakers star Kobe Bryant $100,000 for calling a referee a “fucking faggot” during a heated moment during a game that was captured on video that quickly went viral.

“I was informed today that Roger McDowell, a coach of the Atlanta Braves, is being accused of engaging in highly inappropriate conduct toward fans at a game in San Francisco,” Selig said. “Although I do not yet have all the facts regarding this incident, the allegations are very troubling to me. The Atlanta Braves have assured my office that they will immediately investigate the allegations, and report the results of the investigation to me. After I have all the facts, I will make a determination of how to proceed.”

In other words, McDowell can expect a sanction from the league. The Gay & Lesbian Alliance Against Defamation, a gay media watchdog, has called on the Braves and MLB to punish McDowell.

“McDowell’s apology is a start, but the Atlanta Braves and Major League Baseball must take real disciplinary action and send the message that anti-gay slurs have no place in sports,” GLAAD President Jarrett Barrios said in statement issued Wednesday. “Professional sporting events should be an environment that all fans and families can enjoy, not a place where children are exposed to violent threats and discriminatory language.”

A leading sports columnist for the Atlanta Journal-Constitution is also questioning whether McDowell, a former pitcher who led the New York Mets to a World Series crown in 1986, can survive the incident.

Lest we forget, the Braves have been forced to answer for expressed intolerance before — after John Rocker’s infamous Sports Illustrated rant of December 1999. Bad as that was, it was basically just one loudmouth venting. These allegations are worse: At best they involve unprofessional behavior toward paying customers, and at worst they leave this organization open to the charge that it has a homophobe wearing its uniform.

Here’s how Saturday’s incident unfolded, according to an account from the Los Angeles Times:

Famed attorney Gloria Allred joined Giants fan Justin Quinn, his wife and two daughters at a press conference Wednesday (top photo). They called for McDowell and the team to be fined, for both to apologize and for the coach to attend sensitivity training.

According to Allred, Quinn and his family were in the bleachers during batting practice when they observed the alleged incident. She said Quinn responded by yelling to McDowell: “Hey, there are kids out here.”

Allred said McDowell called back: “Kids don’t [expletive] belong at the baseball park.” She said McDowell picked up a bat and walked toward Quinn in a threatening manner, asking: “How much are your teeth worth?”