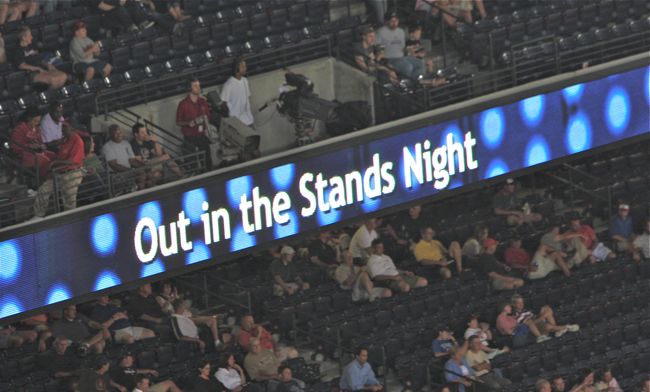 The Atlanta Braves broke a four-game losing streak with flair on Tuesday, leaving gay fans in the stands wondering if the playoff-bound team was showing off just for them. You wish. It was, after all, Out in the Stands and more than 200 people bought tickets to the event, crafted by the statewide gay group Georgia Equality as part of the Braves’ penance in the wake of an anti-gay rant and some sexually-suggestive gestures with a bat earlier this year.

Gay fans were clustered in two seating sections at Turner Field and were on hand to see the public debut of an anti-bullying video that includes several Braves players. They were also treated to welcome messages for the event that flashed on large signboards during a break in the on-the-field action (top photo). The anti-bullying public service announcement hasn’t yet aired outside the stadium, though the Braves say that's in the works.

Out in the Stands came from discussions earlier this year between the Braves and a trio of LGBT groups – Georgia Equality, Georgia Safe Schools Coalition and PFLAG. The groups met with Braves President John Schuerholz in May to address lingering damage from pitching coach Roger McDowell’s rant in April that resulted in him being benched for two weeks, fined an undisclosed amount, and ordered to undergo sensitivity training. Jeff Graham, Georgia Equality’s executive director, hinted at the time that the Braves wanted to become involved in safe schools efforts.